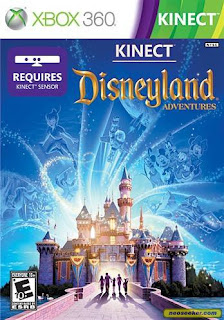 The Between Family may be a little late to the party, but recently we have picked up a copy of Kinect Disneyland Adventures.  And it has led the family to a whole new level of Dreaming Disney as we have experienced a little piece of Disneyland right in our living room.  You can get a full review of the game elsewhere including walk throughs and technical specifications.  Instead I plan to provide you our observations about using the game to connect to the Disney Parks experience.

Take a walk in the park!
·        You really are navigating through Disneyland.  And the Between Kids love walking    around and trying to go from point A to point B.  They could use the map to jump right to the mini games they want, but they are more satisfied when their character walks there on their own.
·        The graphics and soundtrack make you feel like you are really at Disneyland from your living room.  The background music is Disneyland background music.  The buildings are Disneyland show buildings.  Kinect Disneyland Adventure is likely the best virtual representation of the Disneyland Park that a family can have in their living room.
·        The Between Kids love interacting with the park and hugging characters and gathering autographs though we are nowhere near Disneyland.

Bring on the mini games!
·         Players do not ride the Disneyland rides per say, but instead plays mini games that have links to the ride.  So on the Matterhorn you ski with Goofy and have a snowball fight with the Yeti.  On Pirates of the Caribbean you battle alligators and seek treasure.  And in The Many Adventures of Winnie the Pooh, you experience a completely random set of scenes, sorry that’s the ride.  I mean you float on a balloon gathering coins and honey pots.  Though not the rides themselves they are in the spirit of the rides.
·         The Between Family are not big gamers. But overall these games are easy to play and even the youngest Between Kid can navigate through the games and control the action on the screen.

Move It, Move It!
·         During the winter I worry that the active Between Kids don’t have enough opportunity to work off their excess energy.  And I do not like them sitting stationary in front of a television if we can avoid it.  Instead with this game they are moving moving moving.  They have to reach, grasp, jump, shuffle and move to make the mini games work, making happy Between Parents.

Not all animation is created equal.
·         Some of the animation in the setup scenes and mini games is really terrific.  Which makes it clear when animated scenes are not, well, that good.  For example the Many Adventures of Winnie the Pooh scenes just does not compare to well to others.

In or Out?
·         The Between Family is not skilled with the Kinect yet.  So we find it relatively easy to be dropped in and out of the game by the X-Box.  Now one advantage this gives is easy handoffs so members of the family can easily take turns without the game having to be turned off.  But it also means sometimes it is easy to accidently drop yourself out of the game because you did not move enough or stood in the wrong place without knowing it, even if you are an adult.
·         The game assigns players an avatar.  With dropping in and out occurring sometimes it is difficult to realize which avatar you are.  Am I the girl right now?  Am I wearing a hat?  It can get a little confusing.

Oui my back!
·         I have a history of back issues.  Strangely enough I have never had back issues when visiting a Disney Park, I have felt very lucky about this.  Kinect Disneyland Adventures is the first game I ever played with Kinect.  And I strained my back, my first Disney related back issue.  I was trying to walk through the park instead of pointing my character through the park.  This lead to what could only be called a “silly walk.”  So I would suggest game players if it feels weird, you may be doing it wrong!

Despite any negative points here, The Between Family love this game.  It is the perfect game for Disney fans connecting you in an active way to the Disneyland Park in your living room.  It is a whole bunch of awesome.  Every member of the family enjoys playing!  It has brought one of our favorite places virtually into our home and in a way where we can interact with it.

Posted by Between Disney at 5:41 AM

Email ThisBlogThis!Share to TwitterShare to FacebookShare to Pinterest
Labels: Goofy Gadgets, Kinect Disneyland Adventures, Matterhorn, Pirates of the Caribbean, The Many Adventures of Winnie the Pooh, XBox 360