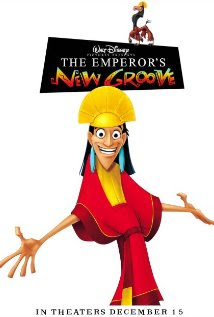 Recently it was pointed out to me that I have gaps in my Disney background.  One of these blind spots is I have never seen 2000’s The Emperor’s New Groove.  In this animated feature an unlovable Incan emperor named Kuzco is magically transformed into a llama by his advisor, Yzma, who attempts to steal his throne.  Of course, hijinks then occur.   While I admit this is not one of my favorite Disney movies, there are still plenty of tributes to the House of Mouse:
·     John Goodman: Goodman voices Pacha, the large and lovable peasant who shares in Emperor Kuzco’s adventures during the film.  As we hear Goodman’s voice we can’t help but think of another big lovable Disney character, Sulley from Pixar’s Monster, Inc. and the future Monster University.  Is it possible that Goodman has been typecast?

·     The Old Man: Kuzco punishes an old man for ruining his groove.  The somewhat frightened voice that responds sounds so so familiar to Disney fans.  It’s because the old man is voiced by the late John Fiedler, the actor who played Piglet in Disney’s Winnie the Pooh productions from 1977 to 2005.  He also had other voice roles in Disney films like Robin Hood, The Fox and the Hound, and The Rescuers.  Is it fair to call him a legend?  I think so!  Along with voice acting Fiedler had a long acting career in both films and television programs including The Shaggy D.A., Fantasy Island, Star Trek, Three’s Company, The Bob Newhart Show, and many many more.

·     Roller Coaster Transport:  Yzma and her henchman Kronk travel to her lab by roller coaster!  How awesome would it be to travel to your workplace, man cave or craft room via Space Mountain.

·     Don Hahn: The Emperor’s New Groove shares a producer with Beauty and the Beast, The Lion King, The Hunchback of Notre Dame and other Disney animated films.  Additionally, he directs one of my favorite Disney documentaries, Waking Sleeping Beauty.

·     Patrick Warburton:  Warburton voices Yzma’s henchman Kronk.  And Kronk steals this movie for both adults and kids.  He is innocent, naive, skilled in the kitchen and you can’t help but love him.  When has he played any character that we couldn’t instantly love!  And as I have mentioned before both versions of Soarin hosted by him are one of my favorite rides in the parks.  And I instantly smile and think of his smart flight attendant jacket whenever I hear his voice.
I will admit it, The Emperor’s New Groove is personally not a Disney animated favorite in the Between house.  This family would rather visit Monstropolis and Sully instead of Pacha.  And Winnie the Pooh classic films rate higher for the Between kids.  But I am glad I have closed this gap in my Disney viewing background and found Mousey connections to some of my favorite Disney films.

Posted by Between Disney at 5:33 AM