Between Books - Disney U 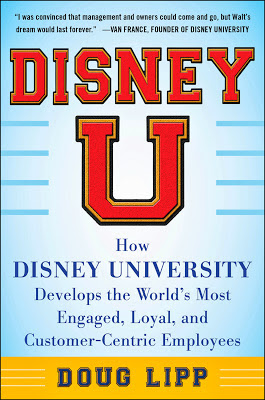 Lipp opens his book with a scenario that outlines what cast members attending classes at Disney University experience.  This allows him to discuss Van France's motivation for founding the training program seven years after the founding of Disneyland and two years after leaving Disney employment.  The man who had helped Walt Disney train in his original cast members returned to a Disneyland that was facing growing pains, staff turnover and a desperate need of a reminder of who and how they served.  Armed with new insights from his absence from Disney, Van France came prepared to revolutionize the Disneyland training program, and did so with the founding of the University of Disneyland (now Disney University).

The typical chapter starts with an incident in Disney corporate history where training was needed to create a course correction.  Lipp generally starts chapters with quotes or scenarios that include Van France himself, helping to show the scope of his 30 plus year Disney career.  Lipp then generally breaks down the concept that Van France was attempting to teach.  Then he demonstrates that concept in action at Disney.  After a wrap up which shows the effectiveness of the training program, Lipp provides a lesson review that provides the key concepts from the chapter and self-reflection questions tied to the the Four Circumstances.

There are two audiences that this book would be attractive to.  The first is those employed to lead and train people.  For training staff the book is a great resource for self reflection on training programs and organizational support of existing programs.  Also, Lipp provides concepts that can be applied to developing training programs.  And as a people leader who does not lead training on a daily basis I still found myself questioning if I foster the four circumstances in our day-to-day operation.

The second audience is Disney fans.  There is not a lot of easily accessible information about Van France.  And Lipp provides snapshots of France's career at a number of key moments in his Disney career.  Honestly, being interested in history, I would have loved more of France's life (though that was not really the point of the book).  Lipp does a great job of showing Van France's relationship with Walt Disney and how he translated the philosophies of Disney such as, "keep the place clean, keep it friendly, and make it fun (34)" even years after Disney's own death.  And along with the history of Van France himself it was highly interesting to me to watch Disney University help overcome issues with new adventures like The Disney Store and Tokyo Disneyland.  One does have to remember however this is not a pure history text, and the historical examples help teaching training concepts.

I found Disney U to be a book that helped challenge my business thinking.  As someone who has to make decisions about training opportunities, it helped broaden my thinking.  Yes Virgina, training can be entertaining and impactful!  And that is a lesson we could all use.

Posted by Between Disney at 8:03 AM