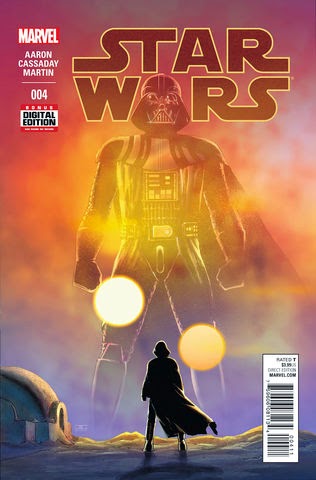 My buddy Ben has a phrase, Darth Vader is hard to draw!  And I have noticed from the original Marvel comics run that sometimes even legends cannot handle Chewbacca.  As I read Star Wars #4, I sadly found these thoughts returning to my mind.

In part IV of "Skywalker Strikes" the Rebels and the Empire deal with the repercussions of the destruction of the Empire's largest weapons factory.  Darth Vader is forced to "negotiate" with Jabba the Hutt on Tatooine.  And the deal making is full of tension as the Empire looks to take the supplies it needs.  Meanwhile Princess Leia pushes the Rebel Alliance to keep pressuring the Empire and asks for a small team to make offensive strikes.  But Luke Skywalker who is reflecting on his lack of Jedi knowledge questions if he should continue the fight.  Finally, Darth Vader attempts to learn more about Obi-Wan Kenobi's time on Tatooine and sends out Bounty Hunters to discover more for him.

I did enjoy this Jason Aaron continuing story, though this issue is more bridge than action.  The tension between the Hutt and the Sith is something every fanboy (and fangirl) can enjoy.  But I do find myself distressed at times with John Cassaday's art.  Yes, there are some brilliant splash pages including the final frame.  But there seems to be a lack of life at times in some of the art.  And at other times I find the eyes disturbing, with both humans like Leia and aliens like Jabba the Hutt.  The art somewhat took away from my enjoyment which combined with a lack of action really made this my least favorite of the four first issues.

I had not noticed before but instead of * to mark editors notes Marvel is using a stylized "SW" to catch our attention.  I hope this carries into other books and continues to push forward the Star Wars branding.

Star Wars #4 was a little disappointing for me.  But it promises to kick off some strong action in the next issue.  So I continue look forward to next month with a smile.  Because with a comic debut like the one found on the last page...well you know something interesting is sure to happen.
Posted by Between Disney at 6:23 AM