Between Books - The Happiest Workplace on Earth 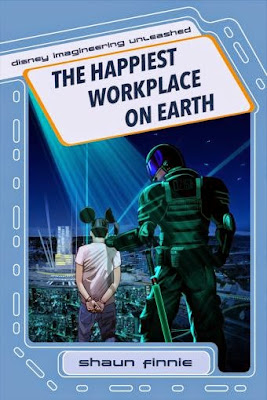 The Happiest Workplace on Earth by Shaun Finnie establishes a parrell world where Walt Disney began work in his city of tomorrow, Epcot, in 1974, and passed away two years later.  Decades later in our future, Jack and Ellie Rothman find their dream come true as they are invited to become citizens of Epcot.  Of course their teenage son Heath rebels against the idea of leaving all of his friends!  Ellie Rothman has dreamed of living in Epcot her entire life and Jack wants to do nothing more than support his wife's dream.  And Jack's expertise with genetically altered plants is the family's avenue into the Experimental Prototype City of Tomorrow, he specializes in designing vegetables filled with anti-depressants.  But Epcot seems less magical than the Rothmans believed as the rules of the community appear oppressive with everyone fearing the Epcot Security Patrol and losing points against their citzenship.  The Rothmans find themselves caught up in a conspiracy that frames Jack Rothman, and his outrageous beret, as a terrorist bent on destroying Walt's futuristic city.

As I started this fictional work I thought, wow this is a nice little what if story about the Epcot that could have been if Walt Disney had lived longer and completed his vision for the Florida Project.  It feels like a nice idyllic city where families and scientists help extend the world's knowledge.  Epcot is a working city where families live and industry flourishes, under the authority of the Walt Disney Company of course.  However, the future is not as bright as one might think.  The cover really should have given it away to me.  Epcot is actually a darker place than we might imagine.  And the Rothman's are not as safe as we might hope.  One's stomach begins to get queasy as we begin to imagine how close Epcot, a planned and controlled society, could be to a tyranny.  Though it is fictional, it does make you wonder about what a completed Epcot could have been, especially when being lead by someone who was not Walt Disney.  Epcot allowed for a large amount of control by the Walt Disney Company and if placed in the hands of the wrong people it could be used to harm others. And it becomes easy to see how some would rebel against that authority.

One cannot but help but cheer for the Rothmans.  I identify most to Jack Rothman, a family man who works hard and as a flair for individuality.  Jack wants to make his move to Epcot work for the sake of his family.  And he becomes the center of the plot that puts himself and his entire family at risk.  I really liked the choice to focus on Jack instead of Heath, who I thought was going to be the action hero.  Jack in many ways is the least likely hero.  Therefore, when Jack is at risk you feel the tension.  Ellie is a loving wife with a dream, one that Jack wants to fulfill.  And his love makes me want to cheer for him more.  Sadly for Ellie this conspiracy will destroy her fantasy of what Epcot is.  And you feel your heartbreaking for her.  Heath is the typical rebellious young adult.  But you can feel like he might be a good kid raised by parents like Jack and Ellie.  And while he is not the center of the story, Heath's character will be tested by the situation.  I find myself focused on the family because it is their interactions in a world gone wrong that kept me returning to the book over and over again.

With Tomorrowland being released soon in theaters, it is a great time to imagine a world that might be.  The Happiest Workplace on Earth provides us a story of a world like ours where Epcot as designed by Walt Disney came to be.  But as the Rothmans show us, maybe that world is far from magical!  And its an Epcot well worth your time to be entertained by and contemplate.  And I am really looking forward to diving into the next book in the "Disney Imagineering Unleashed" series.

Now eat your magic lettuce and be happy!

Posted by Between Disney at 9:37 AM