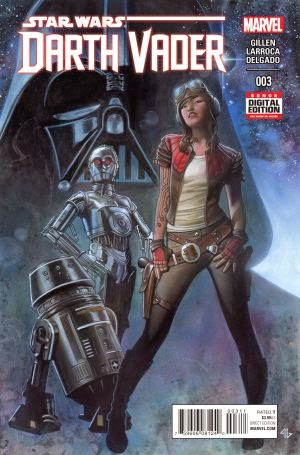 On a quarantined world a young lady makes a desperate attempt to free a murderous robotic mind from imprisonment.  Her desperate attempt leads her into a partnership with Darth Vader, who finds himself without resources while he lacks the Emperor's favor.  Vader partners with the adventurer, rouge archaeologist Doctor Aphra, to increase his personal power through machines, starting with two assasin droids.  Aphra offers Vader even more robot power on a world that has a deep personal connection to Anakin Skywalker.

I really liked this Kieron Gillen story with Salvador Larroca art.  Though I will admit I do feel like I have seen some of this before.  There are portions of this tale that remind me of Brian Wood's Dark Horse arc "Five Days of Sith which also saw a disgraced Vader paired with a female counterpart.  And there is part of Aphra that feels like Indiana Jones...okay a big part including a reframing of a classic line!  So there will be moments where you might say, yeah I have seen this.  But the story still is very successful.

A big part of the success of Darth Vader #3 is setting up Aphra as a character.  She is clearly intelligent, adventurous and follows very questionable morals.  She has quite the dark side to her, but it is different than Vader's evil as she is talkative and what I would call adventurous bad.  I find myself liking this black hat and her love of evil robots is something that has my interest.  So I look forward to seeing what Gillen does next with this new non-Sith bad guy!

Darth Vader #3 hit all the right beats for me.  And I enjoyed yet again the introduction of an entirely new character.  Though if we have learned nothing in our Star Wars lore, standing too close to Darth Vader can get you burned!
Posted by Between Disney at 9:31 AM