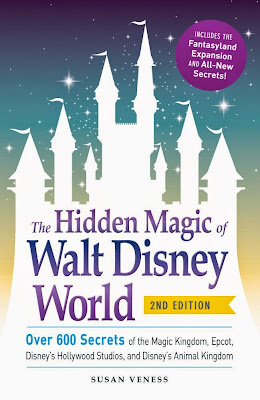 It has been nearly 400 posts since I reviewed The Hidden Magic of Walt Disney World by Susan Veness.  New Fantasyland has come to life.  Test Track is now more Tron than General Motors.  And Avatar has led to shifts at Disney's Animal Kingdom.  I think it is fair to say that now is a good time for an updated version of Veness' title.

The Hidden Magic of Walt Disney World: Over 600 Secrets of the Magic Kingdom, Epcot, Disney's Hollywood Studios and Disney's Animal Kingdom by Susan Veness provides a behind the scenes tour of the Walt Disney World Resort.  Veness walks her readers methodically through the four theme parks, land by land, providing background and hidden secrets to the attractions and sights.  Veness' facts help the guest better understand the work that Imagineers have put into the park, and allows them to seem super knowledgeable to their friends and family as they enjoy their Disney day.  Along with her own descriptive text, Veness breaks away from the tour to give her readers "Fascinating Facts" about the parks and "Imagine That!" interludes where Disney's Imagineers and other creatives discuss attractions in their own words.  Each chapter ends with a detailed and descriptive, though balanced and brief, timeline of each park.

I think the first big question really is how does this stack up to the first edition?

So let us just rip off the band-aid and be honest about the first edition!  At this point if you are buying the original as new to you, you are buying a time capsule, a historical tour of the past.  Because the Walt Disney World Resort of 2009 is long gone at this point!  So really, if you want a behind the scenes tour book for today...you need this volume.  The old volume simply captures attractions that are now extinct.  And I found myself surprised how many new attractions there really were as I read through the book.  Even areas I have thought of as static, like Main Street U.S.A. have significantly changed, with meet and greats now offered on the Magic Kingdom's main drag.  In short, a new edition was truly needed and at times it made it feel like a whole new book to me due to the number of changes at the resort.

Now, just because this is a second edition does not mean that all the old stuff has not been updated.  On page 110 of the original volume is a discussion of the bridge between the France and United Kingdom pavilions at Epcot.  The same paragraph can be found on page 138 in the new edition.  In the old edition this paragraph is followed by an "Imagine That!" which is now absent in the updated volume.  But instead in the new version there is a description of a cameraman not being edited out of the Impressions de France film.  The France segment is actually halved in the Second Edition.  But except for the bridge paragraph the content is new.  The Tower of Terror seems to me to be an attraction that should not have changed much since 2009.  However, while the description includes around the same number of pages, there is new Hidden Magic for the reader to look for.  So despite being an updated edition there is still new Hidden Magic for the reader of the old edition.  And I will admit, though I have not read the original in depth for several years (I have used it as a resource several times though) the Second Edition felt fresh to me.   The two editions are roughly the same size, and I can see edits for space where I assume Veness had to shrink content down to allow for new Hidden Magic and new attractions elsewhere.

Other points I have made in the past stand.  The book is well-written and easy to access.  Veness uses bold text to help the reader scan through content, which is especially helpful when walking through the park and wanting facts on hand.  The book itself is small enough to fit into a backpack.  And I found this edition as enjoyable as the first.

I think if I was to make any suggestions, I would like to see a chapter on Downtown Disney.  But since that is very much in flux in 2015, I can understand why it continues to be excluded.

The time has come for an update!  The Hidden Magic of Walt Disney World: Over 600 Secrets of the Magic Kingdom, Epcot, Disney's Hollywood Studios and Disney's Animal Kingdom by Susan Veness captures the Walt Disney Resort of today, sharing the Hidden Magic in the stories behind beloved Disney attractions.  Some may argue that it steals the Magic.  But for me, Susan Veness has only made the resort more magical by giving background in an easy to digest format.