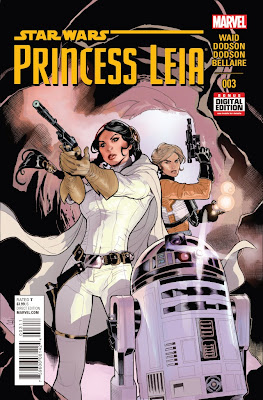 Princess Leia and Evaan continue their search for the scattered remnants of Alderaan.  In Princess Leia #3 her quest takes her to Sullust where a enclave of survivors have preserved themselves in an cloister.  But the leader of the survivors questions Leia's motives and her right to rule.  And the survivors may have a dark past.  The action comes to a head as the Empire finds Leia because of a mole in Leia's entourage.  Can Leia save her people and win their loyalty to her cause?

I have been pretty down on Mark Waid's story in the past, mostly wondering if it was exciting enough.  This issue to me was the best and likely is in my top five of the new Star Wars books.  The story is full of action and it moves at a nice brisk pace.  And R2-D2 gets a nice moment to shine on the page as he demonstrates his resourcefulness.  In short, R2-D2 finally gets something enjoyable to do (or as I would say at Welcome to Level Seven he got off the Bus).  And we get to linger on the conflict that the survivors have about Leia.  Is she somehow part of the Empire, she was a member of the Imperial Senate.  And bad things seem to follow her wherever she goes!  Yes, is Princess Leia really our leader?  We also get to contrast this with Evaan who has unquestionable loyalty to the crown, despite the fact she is not really a fan of the Princess.  So action and character combined with fitting art from Terry Dodson and Rachel Dodson really created a strong issue to me.

As Princess Leia #3 ends she knows that the Empire has her in their sites.  And one cannot help but feel tense as we know who the traitor is.  Can Leia uncover the mole and save her people...next month?
Posted by Between Disney at 10:40 PM