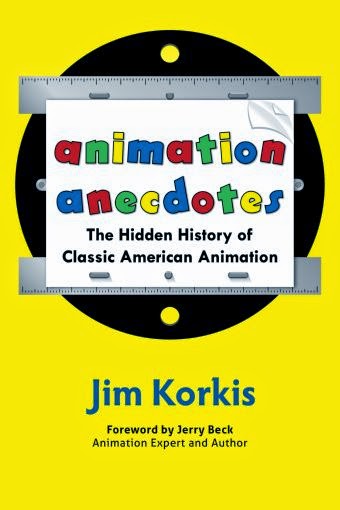 Animation Anecdotes: The Hidden History of Classic American Animation by Jim Korkis provides snippets of animation history from Disney and other animation studios.  The book is broken into 14 chapters organized around studios including Disney, Hanna-Barbara, Bluth and more.  Additionally there are chapters on television productions, non-Disney features, miscellaneous and projects that were never made.  The chapters consist of stories from animation history that are generally never more than a few paragraphs in length.  The stories include lost history, humorous anecdotes, and interesting facets from animation's past.

As a Disney fan the Disney chapter caught my immediate attention, and luckily it was first.  My favorite story from this chapter focuses on Ward Kimball trying to avoid Ray Disney, Walt Disney's older brother.  And being a history fan I enjoyed reading of Adolph Hitler's complicated relationship with Mickey Mouse.  Additional chapters that I enjoyed because they brought back memories of my childhood include Hannah-Barbara and television cartoons.  These chapters allowed me to reflect on Marvel cartoons from my childhood and before along with other Saturday morning cartoons of my past.  I found myself almost shocked to read about how simplistic the animation of some of the earliest Marvel animated programs was.  I do have to admit that despite Batman being part of the other stable, I still really enjoyed these and pretty much all other superhero tales.

Again, the chapters are small.  And the tales are connected by theme and not telling a larger story.  So it is easy to pick the book up and down for commutes or short snippets of reading.  Korkis' writing is clear and easy to follow.  The book also has an index which allows the reader/researcher to jump to the topic or animator they want to read about.

For the Disney fan, Animation Anecdotes helps open one's mind to the larger developments in animation beyond the Disney studio.  One of the trends that a watchful Disney fan will notice is the movement of animators between Disney and other studios including Friz Frelang and Rudy Ising.  This is all done in an accessible format that can be enjoyed by both amateur and serious animation historians in an enjoyable manner.

Posted by Between Disney at 5:20 AM