Between Books - The Hidden Magic of Walt Disney World 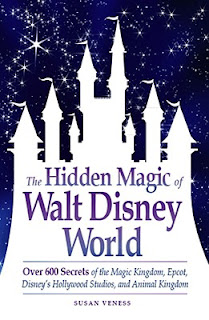 The Hidden Magic of Walt Disney World: Over 600 Secrets of the Magic Kingdom, Epcot, Disney’s Hollywood Studios and the Animal Kingdom by Susan Veness provides context, history and interesting facts to the parks of the Walt Disney World Resort in Orlando Florida. The book serves as a tour of the parks, leading readers systemically through the lands of the four parks. Along with attraction and entertainment information, Veness provides readers with an easy to understand historical timeline for each park. Some text is bolded in the book to provide easy reference when casually scanning or using the text as a guidebook. Along with attraction descriptions there are also additional call outs called “Fascinating Fact” which calls attention to specific behind the scenes or interesting details and “Imagine That” which discusses in more depth the philosophy of Walt Disney Imagineering when developing projects.

This book provides an all in one overview of the Florida parks. So instead of needing multiple books on Walt Disney World, like with the Imagineering guides, one can sit down with one text and get a behind the scenes look at the entire resort. The text is easy to read, and a read most will probably find enjoyable. The Imagineering guides, do serve as a point of comparison with the most striking the difference between the two being images. The Imagineering guides are full of images and concept art. The Hidden Magic of Walt Disney World is image free. Like the Imagineering Guide to the Magic Kingdom at Walt Disney World, my viewpoint of this book has also changed from a guide to more of a historical testament of what was with the removal of Mickey’s Toontown Fair and the growth of Fantasyland. It really is amazing how quickly a book representing itself as a guide can move from timely to historical with the rate of change within the Disney parks! Veness notes she wants to help her readers see the details of the parks and attractions. In that goal she succeeds as she helps those of us often moving too fast to see what is in front of us to look behind our first glance to the remarkable details Imagineers have built into the parks. The Hidden Magic of Walt Disney World is a nice all in one view of the parks of the Walt Disney World resort and a good starting point for growing a Disney obsession living Between Disney.

Posted by Between Disney at 7:02 AM