Between Books - Creating Magic: 10 Common Sense Leadership Strategies from a Life at Disney 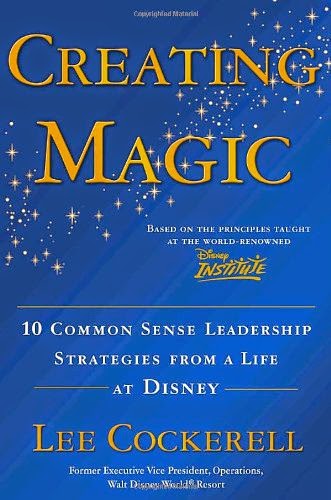 Who wouldn’t want to learn from a successful Disney parks executive? Seriously don’t we all want to know how they got to the top of their profession while also learning about successful leadership? Lee Cockrell, a former Executive Vice President, Operations for the Walt Disney World resort has collected his leadership advice into a book that is available for anyone seeking to improve their personal leadership.

Creating Magic: 10 Common Sense Leadership Strategies from a Life at Disney by Lee Cockerell shares leadership principles taught by the Disney Institute as funneled through Cockerell’s personal experiences in hospitality and as an executive at the Walt Disney World Resort.  Cockerell's chapters are typically 20 pages plus with several sub-points.  Cockerell discusses primarily how to manage effectively by valuing people and their talents, along with working hard.  Really that is Cockerell's secret to being a successful manager.  He gives extensive examples of how he has a manager listened to staff, trained staff and provided opportunity for growth both inside and outside his organizations.  He also details how he personally used practical tools to support his people and be present for them.  In addition, he focuses on the individual manager's need to educate themselves and be a person of character.  Overall, Cockerell does follow in general the same points of the Disney Institute, which puts leadership, employee excellence and guest satisfaction before business results.  One should note that Cockerell's emphasis on people includes the need for employee discipline, and so every solution is not always an instantly happy one.

Cockerell is incredibly honest!  I cannot recollect many business books that include the author admitting that he has been punched by an employee...and more than once.  He shows that the lessons that he has learned and then implemented come from experience and trial and error which has definitely included error.  And in the end really that is what we all as managers have lived.  We all make mistakes and hopefully we have all learned from them, hopefully.  So yes while it is enjoyable to read many of Cockerell's stories in a Disney context.  His stories as a young manager, an unpolished manager, in the hotel industry are honestly even more exciting.  Because they show how Cockerell grew to become the manager that Disney eventually recruited.  Seriously, he tells one story about how he once intimidated a man into the hospital.  He does not tell the story to brag, but you get the sense that the tale helps show how he transferred himself into a manager who made his brand people.

I really enjoyed Creating Magic: 10 Common Sense Leadership Strategies from a Life at Disney.  Lee Cockerell helped validate for me part of my own personal brand of leadership, people matter.  And he let me know as the reader that leaders can and do stumble and grow.  I borrowed Created Magic from the library, since I found the price a little high for me for a business book.  But in the near future I fully intend to purchase my own copy so I can start referencing it on a more frequent basis.

Posted by Between Disney at 6:35 AM