Between Books - Habst and the Disney Saboteurs 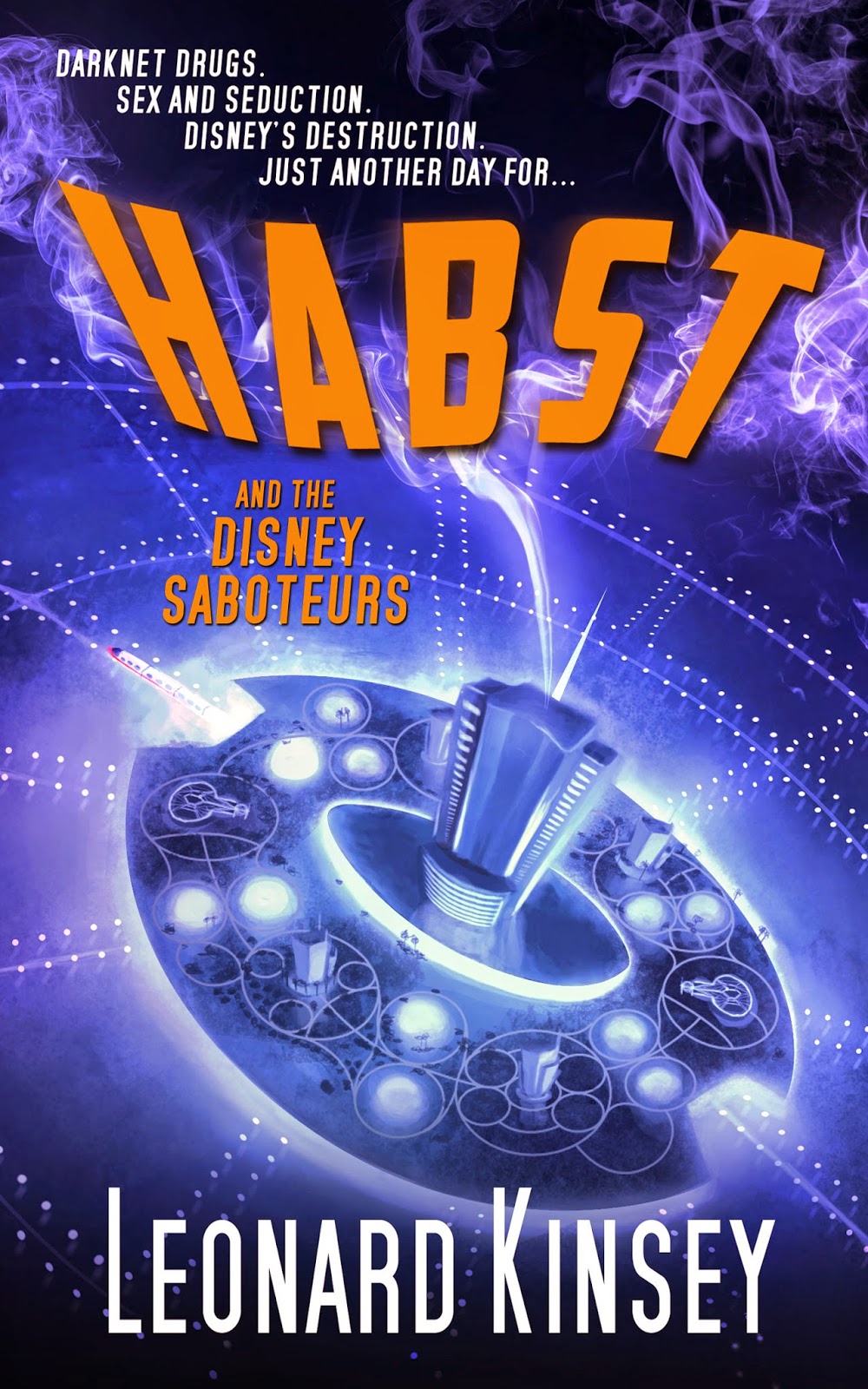 I have established a simple rule.  If Leonard Kinsey sends me something I will read it, no matter how weird it might seem!  I resisted reading his first novel Our Kingdom of Dust, but my need to be a completionist worked against me and I picked up a copy.  And though the content really did not match my lifestyle, I was very pleased with the book.  Now when a package arrives with a protagonist who smokes large amounts of pot, is unemployed and lives with his underage girlfriend it all began to feel like a big stretch to me and I began to wonder if I would typically consider this book.  But I have this rule you see and the book came from Leonard Kinsey.  I don't break the rules, even if Habst does!

Habst and the Disney Saboteurs by Leonard Kinsey is a sci-fi style adventure which takes place at the Walt Disney World Resort.  Reginald "Habst" Habstermeister is a former Walt Disney World custodial staff member with only two things on his mind, smoking marijuana and earning virtual currency to purchase his drugs online.  Habst is paid by a mysterious benefactor for recording behind the scenes videos of attractions in the Walt Disney World Resort.  But Habst is accused of terrorism when attractions he recorded begin to be sabotaged.  Habst and Charlie Walker, the head of Walt Disney World security, have three days to uncover the real culprit or face a lengthy prison sentence.  Can Habst a perennial mess-up solve this mystery?   And who can the young man trust with his freedom on the line?

If you are uncomfortable with books that detail drug use, including Habst's guide to buying drugs online, or sex acts with minors, Habst and the Disney Saboteurs may not be for you.  If you are comfortable with these fictional situations or willing to look past them you are likely to find an interesting and fun adventure story set in one of your favorite places.  Kinsey finds a way for the reader who does not live Habst's lifestyle to uncover a likable character.  We have all at times been a screw-up so you can feel sympathy for Habst as he feels out of control and helpless.  You just may not have created the situation to the extent he has.  So despite the fact that Habst is really not someone I would invite over to my home, I found myself cheering for him.  But again be warned, Habst's lifestyle includes constant drug use and sexual encounters.  If they are going to offend you, I suggest just walking away.  For me, I moved past the fact that Habst and I do not live compatible lifestyles and let myself enjoy the ride.

There's a Bambooniverse!  Early on as Habst slipped into the Magic Kingdom Park I saw the first clue with the name of a character from Our Kingdom of Dust.  But when I read that Charlie Walker was the head of Walt Disney World security, Kinsey had my attention and I realized that Bamboo Forest had established a shared universe!  I really enjoy the character of Charlie Walker from Hollow World by Nick Pobursky.  And I had hoped for further adventures featuring this brilliant detective.  But I did not expect him to be in a book by another author, showing up again so soon, having his family's story extended and being in a book that has some sci-fi elements.  It was a great surprise and it helped me deal with Habst!  I know Charlie Walker.  I trust Charlie Walker.  Charlie Walker is a responsible family guy like me.  But seeing how Charlie accepts Habst and wants to see the best in him, allowed me to better accept Habst.  It was a great addition for establishing a shared universe and providing a contrast to Habst.

There are a lot of science-fiction elements to this story.  The digital world is heavily featured in Habst and the Disney Saboteurs with the most obvious being the establishment of an entire online currency and economy in virtcoins, Habst's only currency.  But there are elements that go beyond just a sci-fi currency that will please the hard core science fiction fan including references to Walt Disney's friend Ray Bradbury.  And there were elements of this tale that reminded me of a Bradbury story where the tale takes place in a world like ours, but with a slight twist of the fantastic.  Other moments reminded me greatly of Captain America: The Winter Soldier with a strong enough connection that I had to review publication and release dates in my head to make sure one was not influencing the other!  The math worked out just fine!

I feel like being part of the Bambooniverse, we also have Hidden Leonards. Case in point, Habst likes to adventure backstage and into areas like the Ultidors under the Magic Kingdom.  Kinsey himself has documented his backstage adventures in The Dark Side of Disney.  Habst enjoys himself (too much some might say) but is not malicious.  Habst is a lover of Disney theme parks.  And his opinions are likely ones shared with Kinsey including attractions that they both miss and likely despise.  Yes, I have a feeling that Kinsey sees some of himself in Habst.  And maybe because there is some reality in the personality on the page that helps it come to life.  And maybe the author has thought a time or two about how to quicken an early refurbishment to a few attractions.

Overall, Habst and the Disney Saboteurs, is a fun adventure with some science fiction sprinkled in.  I grew to care for Habst, with at least the sentiment that I did not want anything horrible to happen to him.  But, because I am a total nut for shared universes, my favorite moment was likely the re-introduction of Charlie Walker.  I really want to see where this shared literary landscape goes next.  There are even hints to an untold Walker tale in this book.  Therefore, for those now watching the Babooniverse this volume is a must have.  For those who like fictional tales in Walt Disney World, I would suggest grabbing a copy.  And for those who are a little more conservative, maybe grab a Kindle version because Bamboo Forest titles in this format are always priced fairly.  If you do pick up a copy prepare to have a little fun in a well written story where you never know who you might bump into.


Review Copy Provided by Bamboo Forest Publishing
Posted by Between Disney at 5:37 AM