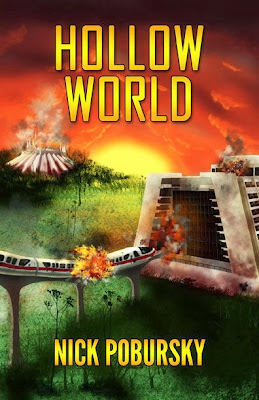 Honestly Detective Charlie Walker may be having the worst Walt Disney World vacation ever!  Sure his entire family loves the resort, but when your family is kidnapped from the Magic Kingdom Park as they sit right next to you, well it is sure to kick off a bummer of a trip!  Will Charlie be able to save his family and his love of Disney Parks?

Hollow World by Nick Pobursky offers the fictional story of Detroit Detective Charlie Walker.  Walker is an intelligent and hard-working officer who  made a local splash a few years earlier when he caught a local serial killer.  Walker who has Sherlock Holmes like deduction skills does have one retreat from the stress of his detective work, regularly visiting the Walt Disney World Resort with his wife and two daughters.  While on his latest trip things go painfully wrong as Walker's family is kidnapped within the confines of Tomorrowland!  The kidnapper is a genius, organized mad man who has established an elaborate challenge for Charlie, with the prize being his own family.   Charlie must defeat the villain's puzzle set up within Walt Disney World.  And the consequences of failure may be beyond the lives of Charlie's family.

I usually do not read this type of book, mystery thriller.  So I was a little wary that this book would fall flat with me.  However, Pobursky provided two hooks that pulled me into the story.  First, and most obvious, is the setting of the Walt Disney World Resort which drew me in as a Disney Parks fan.  Second, though I am not a first-class detective, Charlie is a family man who loves Walt Disney World.  So I can relate to him.  And his problem of saving his family is one that does provide plenty of tension for me.  Though I will admit compared to Charlie I would be completely useless.  So knowing that I would be lost in this scenario and completely overwhelmed, the story effectively had weight for me.  Luckily for the story, Charlie Walker is a smarter man than I (or at least more logical).

Along with Charlie there are a number of interesting characters that help the story move along.  The villain, Spencer Holloway, is precise, intelligent, creepy and immoral.  The lives of others mean nothing to him and you really believe he will kill the entire Walker family from the youngest daughter to Charlie himself.  Henchman Jeremy is a complicated story of compliance and naughtiness.  And Team X-Ray whose interference in the Walker's life changes Holloway's game, is full of interesting characters who I can see carrying a story of their own.  So again, despite not typically reading this type of book, I found it very interesting and enjoyable.

Pobursky succeeds at bringing realism to the story.  For Disney fans stuck in their hotel rooms, Stacy makes the story.  And of course that simple fact provides authenticity to the story since you can see the television loop in your head.  And for the action, I spent a good thirty minutes Googling the very real Microtech knives.  And the security situation at the gates of Disney's Hollywood Studio will ring true and a little scary.  The book jacket states that the book is R-Rated Fiction, and I can see how this statement could scare away some readers.  But again, I would say do not let this pull you away from the story.  The R-Rated situations are similar to those found in thrillers and action-adventures.  And they strike realistic to the story.  And unlike other Disney based fiction stories, Pobursky does not provide a fictitious history of the parks to support his stories.  Instead the resort serves as a real place with a real history in which the story is occurring.

So, do I recommend this book?  Yes, this is such a no-brainer for me.  I read the print book and believe it is a great vacation read.  It was bigger than a paperback novel, but still fit nicely in my book bag.  I read it over my Thanksgiving break, which could explain why I pictured Holloway as the Duke of Weselton from Frozen.   I had received a review copy, but if I had not I would have instantly purchased the Kindle version for myself, because its only $3.99.  I so often see books that publishers offer in both a print and electronic format where the electronic format is only a few dollars less than the print edition.  But here Bamboo Forest Publishing proves yet again they are concerned with getting their author's work into the hands of the Disney fan instead of gouging pocketbooks.  Seriously at that price, even if you are just meh on this read, you have lost virtually nothing.

Hollow World by Nick Pobursky is an action story that draws the reader into the story set within Walt Disney World.  The reader is tense as one wonders if Walker or his family survives, since it is clear that not everyone will make it through Pobursky's tale unharmed.  Hollow World is a fun read that will likely appeal to action-adventure fans (even those with limited knowledge of the Walt Disney World Resort) and Disney fans alike.  Honestly, I would really enjoy a sequel involving these characters, even if it was set outside my favorite parks.  I wonder if the Walker's have never gone to Universal, I mean I have not but maybe the Walkers could!

Post-Credit Scene:  As a fan of the Marvel Cinematic Universe (MCU) I am always looking for Easter Eggs and Post-Credit scenes.  I chuckled as Pobursky gives his reader a post-credit scene, okay its "Acknowledgement", that tips a figurative hat to the MCU.  And you have to read the "About the Author" section which has a trademarked chuckle or two, and a promise familiar to James Bond and MCU fans.

Posted by Between Disney at 5:55 AM