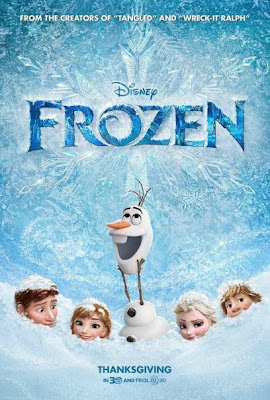 As I sit here at the computer, it is snowing. And I mean it is cats and dogs snowing. So it makes it a perfect time to reflect on the story of Elsa and Anna in Frozen, because it really looks like the landscape outside could have been crafted by Elsa herself.

In Frozen, Elsa and Anna are two close sisters who love to play together. But in an accident in their youth, Elsa withdraws from her sister. You see Elsa has the ability to make ice and snow and her (cough cough) mutant ability harms Anna. So she hides and seeks to control her power with the help of her parents the King and Queen of Arendelle. After their parents die, Elsa is crowned Queen of the kingdom when she comes of age. But her coronation goes poorly and her ability is exposed and she goes on the run. Anna, leaves her fiancé Prince Hans, to run the kingdom as she seeks out Anna. Along her journey she meets ice salesman Kristoff, reindeer Sven and snowman Olaf. Can Anna save her family and her kingdom in this Mousey Movie:


I really liked Frozen and I look forward to seeing it again. I honestly still liked Tangled a little better, but this film was still a hit with me. The fact that I liked it so much surprised me since I was not thrilled with the trailers at all, mostly because they first trailer really did not show me what the movie was really about. And it is a hit with the Between Kids. The oldest is pleased that we now have the Frozen Disney Infinity set, with Anna as the go to character. And the youngest has been running around telling us about the joy of warm hugs.

Yep, it is cold out here in Betweenland. The best way to deal with the chill is to get in the spirit and take in a showing of Frozen.

Posted by Between Disney at 8:22 AM