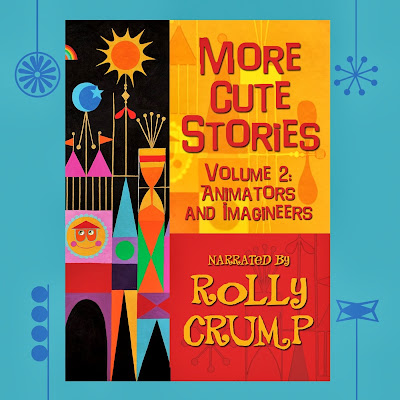 Over the last few years, Rolly Crump has allowed Disney fans to look at him as an open book.  First, he collaborated on an excellent memoir of his life working for Walt Disney and the years beyond in the themed entertainment business.  Then he released a CD of oral history that includes some of his "cute stories".  Now with his second volume of audio stories, Crump introduces us to familiar and not so familiar names and provides some frank cute stories of working for WED Enterprises and the Walt Disney Studio as an animator.

The format of this collection, More Cute Stores, Volume 2: Animators and Imagineers,  is pretty simple.  There is a brief introduction where the name of the discussed animator or imagineer is spoken.  Then Crump captures a story or two about the Disney contributor in his own words.  The stories vary in length from around two minutes to four minutes, one track is less than a minute.  The figures covered include a who's who of familiar Disney names including Yale Gracey, Harriet Burns, Bill Justice, Ward Kimball and Blaine Gibson.  But there is among the Disney giants names like Art Stevens, Bob Smith and Jack Miller who Disney fans are likely not as familiar with.

If I could describe the tone, it would be frank and honest.  Crump makes mention of teaching and learning to smoke cigarettes.  And since he preferred special food to go with his smokes and had a dealer to help supply his stash, well I'm guessing it was not tobacco that he was rolling.  And he calls it as he saw it, including mentioning a time where Marc Davis in his mind committed a shameful act.  If anything stands out it is the absence of Alice and Marc Davis with whom he collaborated on it's a small world with.  But then perhaps that says something about Crump's feelings (or it could mean nothing at all).   Ward Kimball does stand out as someone that Crump respected and appreciated for bringing him to Imagineering.  Another thing that stands out is the working conditions at Disney in animation, and it makes sense as you hear Crump talk why animators were at times laid off.

I am a big podcast consumer, so I often compare pay audio content to free podcasts.  I have not heard Crump tell the majority of these stories elsewhere.  Most podcasts want to hear about Yale Gracey, not Keith Elder!  If I had not received a review copy, I would have likely bought myself a physical copy for this nearly an hour of stories.  But for those who do not wish to pay the full price, there is a download option available for half the price.  Honestly, it is fresh and more frank than one would typically find in a podcast interview.

More Cute Stores, Volume 2: Animators and Imagineers continues to build the Crump legend.  You hear the tales from Crump himself, the man many likely wish they had for a grandfather as he shares credit for many of the Disney successes.  And the frankness provides a honesty that makes you understand how he may have grated against others at WED for being such an individual while endearing himself to others.

Review Copy Provided by Bamboo Forest Publishing
Posted by Between Disney at 6:19 AM