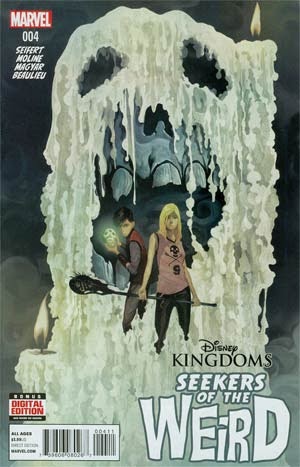 Melody and Maxwell Keep are in the final stage of assembling the living room and summoning the Coffin Clock.  But once they get the clock, they will have to consider the consequences of surrendering the Clock to the Shadow Society.  Would releasing horror upon the Earth be an appropriate price for regaining their parents.  To complete the living room, the kids use new toys (weapons) given to them by Uncle Roland.  The issue sets up a battle between the Keeps, the Wardens and the Shadow Society.  As the concluding battle starts the Keep kids wonder who they can trust!

As a villain group, I find myself really interested in the Shadow Society.  There name fits their methods.  They actually use shadows as armor, making them untouchable while they are in shadow.  I loved it because it seems really Peter Pan like.  Additionally, the looks of the Wardens are very cool and varied as drawn by Karl Moline.

The big question I have as we creep to the conclusion is would I like to see more.  The answer is a resounding yes.  I do feel like Brandon Seifert's story is coming to a satisfying conclusion.  But with that being said I do feel like I would enjoy more stories of the Keep kids in the future.  So after the next Disney Kingdoms series comes to an end I would love to see a sequel mini-series to tell more stories of the kids in this world.  And the Between Kids would line up to read it too.  And honestly, we really need more all-ages comics that adults can enjoy.  So I hope Disney decides to move forward with more chapters of this family as they interact with Walt Disney's unbuilt attraction.

Posted by Between Disney at 5:51 AM