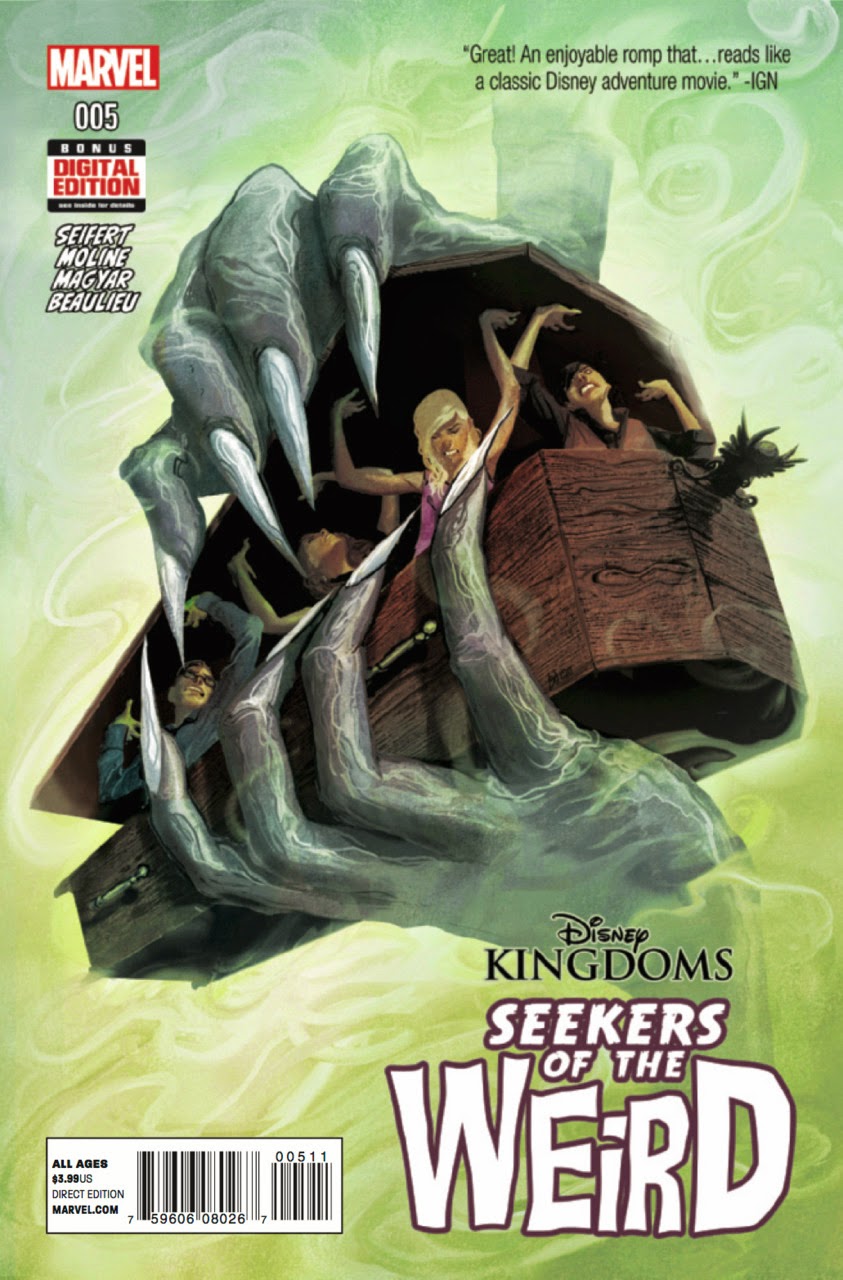 It is the final battle!  The Wardens of the Museum of the Weird face off against Despoina and the Shadow Society hoping to free the Reaper King from the Coffin Clock.  And the Keep kids are stuck in the middle as they hope to free their parents and save the world.  Will Uncle Roland prove to be a hero that the kids can trust?  This questions and more are answered in the final action-packed issue of Brandon Seifert's and Karl Moline's final issue from this new Disney comic line.

As an issue, I felt Disney Kingdoms Seekers of the Weird was somewhat typical for a final story arc comic issue, a fast resolve.  That happens in most comic stories as setup often takes much of the artist and writer's time.  I was satisfied with the ending, how characters were handled and felt it was consistent with the entire five issue run.  In my house the continued use of the lacrosse stick is very popular!  Overall, Siefert gave his title a successful and satisfying ending.

I want to see more of this.  I mean this in two ways.  First, I do not like horror but I love comic books.  And I feel like there is not enough all ages comics.  This really is a horror comic that both adults and kids can enjoy.  There are monsters and demons but it is not so scary that neither the Between Tween or I had trouble sleeping.  And it was something we both could read together.  My local comic shop guy thought it was really cool I was sharing a comic with one of my children.  The Tween reads this title because of the Disney angle, superhero titles generally are not enjoyed by this youngster.   Second, I want more of this story.  Yes, we know more Disney Kingdoms are on the way.  And that is great.  But I do feel like another mini-series story could be told about the Keep kids and their family.  An Uncle Roland prequel could also be cool.  I just worry that the sales drops, typical with any comic, could hurt the future of the franchise.  Of course, it is with the collected edition Marvel will make its money.

And crazy idea here, please sell this in the parks.  Use the Haunted Mansions to get kids interested in comics!

Next month Figment #1!
Posted by Between Disney at 5:22 AM

Email ThisBlogThis!Share to TwitterShare to FacebookShare to Pinterest
Labels: Brandon Seifert, Cap's Comics, Disney Kingdoms Seekers of the Weird, Karl Moline, The Haunted Mansion, The Museum of the Weird