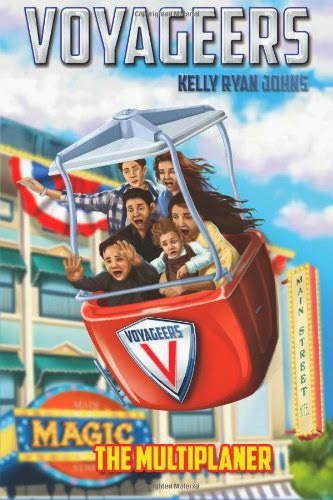 In Voyageers: The Multiplaner Kelly Ryan Johns introduces young readers to Christa and Thomas two sibling orphans who have had a rough go since their parents passed away.  The duo are recruited into the Voyageers program, a secret society created by Walt Disney, where the children are trained to be cast members who make magic for guests and correct the wrongs within the park throughout time. The children enter a world where they interact with Disney Legends, many who have passed away in our world, and the Protector himself Jack Duncan from The  Deadliest Cast Member.  The kids are recruited for a time hopping mission that takes them into their past in Disneyland to reclaim Walt Disney's greatest innovation the Multiplaner from a terrorist who has evil plans that go beyond the resort.  Can the kids save the day or will their actions disrupt time itself?

First of foremost this is a book for tweens and teenagers.  It is clear and easy for a teen reader to dive into.  And I think the story is one that a young Disney fan, like the Between Tween, would enjoy.  It is speculative fiction that makes a young Disney fan ask what if.  For an adult it is a nice adventure, but is not as tense or as adult as Johns' earlier work.  Johns really is reaching the audience he intended to.

Probably one of the most interesting aspects is the fact that this text is part of a shared universe with The Deadliest Cast Member.  Events for Johns' earlier book are referenced.  And though Jack Duncan does not appear often, his presence is felt as the Protector.  And if the kids entered a dangerous situation knowing Duncan's abilities and character does help put a reader slightly at ease when considering the possible fates of the children.  Additionally, this story feels like a continuation of the Duncan story since it mentions items from the end of the earlier book.  It feels like this story includes part of the next steps of Duncan's world since he was not the Protector in his original story.  Though I will admit it did take me some time to re-orient myself into Johns' fantastical universe.

Probably one of the more interesting aspects of this book is the merging of fact and fiction.  Disney Legends interact with the kids, such as Ray Van de Warker.  The use of this character did lead me to do some quick research to confirm that he was both real and discover why he had a Main Street window.  I love how Johns' work leads me to look more deeply into Disneyland history. Van de Warker and other late legends interact with the kids in the very fictional Voyageers realm.  It is a fantastic place, right above our eyes, in the real park.  Though this place does not exist one really does feel like it is the sort of magic that should exist in a Disney park.  And the blending of fact with fiction helps the reader go with Johns in his fictional tale.

Voyageers: The Multiplaner is a part science-fiction and part magic.  It would be a good reading option, especially in summer, for youth who enjoy Disneyland and Disney history.  In the end it is a fun romp with fantastical elements that helps one believe in the real Magic of Disney.