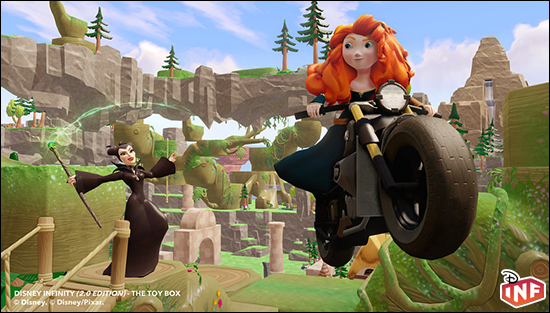 We already knew that Marvel's greatest heroes would be assembling in Disney Infinity 2.0.  But now we know that they will be joined by Princess Merida and the star of the number one movie in America, Maleficent in the Toy Box.

Here are my first thoughts.  I like seeing toys themed to them in the Toy Box mode.  But I wish they were included in Play Sets.  Really that is what I want more of after the huge hit the Lone Ranger set was in my home.  Sets are fun for me!

Is Merida and Hawkeye going to have the same power sets?  She seems to be showing off some martial arts and using her bow in a Hawkeye like fashion?  Can you buy Merida and have her join the Avengers?  Maybe she is the Kate version of Hawkeye?

I am honestly more excited about Marvel.  But I think everyone could have guessed that one!
Posted by Between Disney at 6:47 AM