Between Books - Voyageers: The Great Storyteller 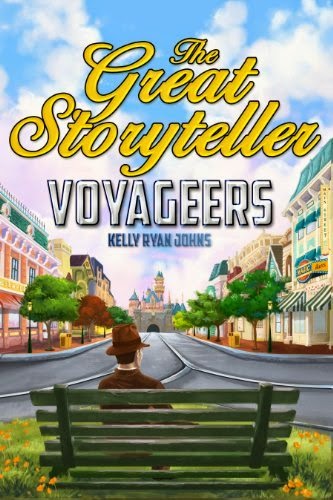 There is power in storytelling.  It is storytelling that has allowed us to maintain our history, shape our values and craft our culture.  Kelly Ryan Johns paints a world, or a Disneyland, where storytelling shapes the physical world.  And when the world's greatest storyteller is absent there are dire consequences.

In this second Voyageers book offered by Kelly Ryan Johns, Voyageers: The Great Storyteller, the readers see how one man's stories can impact the world.  Walt Disney receives a mysterious call and disappears.  His absence appears to have changed Disneyland, which is now dirty and superficial.   And United States' history is impacted as the the Cold War is still in full swing during present day.  And there are no Mickey Mouse's in Disneyland, instead Oswald the Lucky Rabbit has taken his place.  The Voyageers must travel through time including Disneyland's Opening Day to find Walt Disney and discover what has gone wrong with his greatest storytelling creation.

Storytelling is a constant theme throughout the book, with Walt Disney being the greatest storyteller of all.  We discover that Voyageers Christa and Thomas also have this gift, a super power one might say.  But they are not the only storytellers needed to fix Disneyland.  And I will admit I gave a fanboy laugh as two living legend storytellers entered the scene!  I do think that storytelling is a great theme for a book about Walt Disney and his parks since one really does feel like they have entered a story when passing through the gates.

This second book in the series kept my interest more than the first.  I believe this happened because to me Voyageers: The Great Storyteller often felt like Jack Duncan's book and as a more direct sequel to The Deadliest Cast Member than the first Voyageers book.  Stan Duncan is an important character to the story.  Duncan's children and support staff are mentioned.  Jack is very much in charge of the action as we get to see him rush into action again.  And we get to see character development in his best friend Kendall, an action hero I really like and look forward to seeing how he is used in the Deadliest future books.

Here we go again learning Disney history in a fictional book.  Johns uses Charles Mintz and George Winkler in the story as men who provided obstacles to young Walt.  And you have to applaud Johns' depiction of them as men not bigger than life monsters.  And I was hoping to catch Johns in some historical inaccuracy as he introduces Roger Broggie to the story.  As I read this tail of a son of the original Imagineer I thought surely he is discussing Michael.  I mean seriously I have his book right here.  No, in the end I was shamed with my lack of knowledge of Roger Broggie Jr. and all the things he did for Walt Disney.  And his use in the story filled the needs of the moment, since the problem involved his real world expertise.

This is a book for kids.  And though Duncan has a greater role in the book it is usually through the eyes of the Voyageers we see the action.  The tale does give a youngster opportunity to consider what courage means, the power of second chances, and love.  And I never thought of the kids being in overly great physical danger with the Prince often accompanying the Voyageer teams on missions.  So despite the fact that all of Disneyland could have been removed from history, I worried less since the Prince was on the scene.

Voyageers: The Great Storyteller is a science-fiction action story for youngsters, and the young at heart, that love Disney History.  As the kids jump through time however there are other lessons to be learned especially about forgiveness and the power behind a story.  Stories build, and hopefully your stories will build great and wonderful things.

Review Copy Provided By Author For Purposes of Review

Posted by Between Disney at 5:21 AM