Between Books - The Deadliest Cast Member: Season One 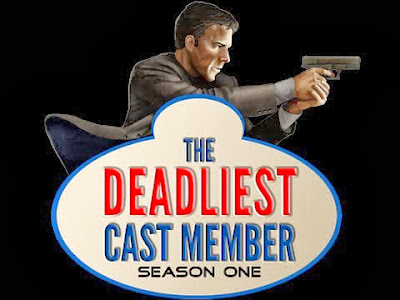 Jack Duncan is your typical Disney Parks fan. He enjoys spending time with his family at Disneyland. He visits as often as possible, which for him is a lot. He knows to savor the background and setting established by the Imagineers. His mind holds a wealth of Disney history and trivia. And he is a Special Forces trained security expert that is our only hope against a terrorist plot that would wipe Disneyland off the map and kill many in the area. So yeah, typical Disney fan.

The Deadliest Cast Member: Season One by Kelly Ryan Johns collects the previously released Season One installments of this story that had been released as e-books. Johns introduces us to Jack Duncan, a father, widower and the guardian of Disney’s security. Duncan’s father was a close friend and associate to Walt Disney and had created Disneyland’s elaborate security system. Jack spends most of his year living in a suite at Disney’s Grand California Hotel & Spa. Duncan had left his role as a Navy Seal to follow his father’s footsteps in the parks. Jack is also a celebrity, having completed an unexplained heroic act in the parks a few years ago. Additionally, his wife passed away in an undisclosed fashion due to the actions of his and his father’s nemesis, Nikolai Grusov. Grusov, despite Jack believing he had killed the villain earlier, is back and holds the Disneyland resort hostage with a dirty bomb. Duncan takes the lead in a story that incorporates mystery, action, speculative technology, Disney history, and maybe magic (or is that science by another name).

There are a lot of layers to pull back on this story when breaking it down.

First, as a Disney fan, this story is a dream come true. Jack and his kids basically live at Disneyland. He has a fantastic suite at the Grand Californian. And when he has to move out of his lodgings, for Johnny Depp who Jack is friends with, he moves temporarily into the Dream Suite! That just does not seem fair! Really who among us would not enjoy this lifestyle! The Duncan’s eat at Club 33 and can exclusively use rooms in the club. He can access back exits and hidden tunnels to get around in the park. He is tied to the history of the park through his father, who was Walt Disney’s “greatest friend”. It really is a dream life. And Johns knows the park, so as you are jealous of Duncan and his lifestyle, the park serves as a character within the book.

Second, this is an action story. This is a 24 type anti-terrorism story set in Disneyland. There are guns, bombs, martial arts and fighting. There is a goal of finding and defusing a bomb before an entire community is harmed. And at the center of it all is Jack the experienced and capable military operator. And I feel it worked on this level. In fact, I may never look at the park the same way again. Could a gunman be behind that corner?

Third, this story is a mystery or a puzzle. Much like a book with a very different tone, In the Shadow of the Matterhorn, readers are provided a mystery within the park. And the story is built around real locations and fake clues within the park. For Disney fans, this mystery goes back to Walt Disney himself and his hopes for his Park.

Finally, The Deadliest Cast Member: Season One is a work of speculative fiction. It is filled with Sci-Fi science, or magic, that we do not use in our world. But they do help to show how fictional magic exists within Disneyland. This element is probably the one I expected the least, and probably needed the least. This final element probably most reminded me of Midlife Mouse, yet another very different book. And despite the fact that there is a lot going on in this story, the book still worked for me with this element mixed in.

Cost wise this book sells for $4.99 on Kindle, which seems like a competitive price point. It collects 6 separate segments which sell for 99 cents to $2.99 a piece so you do save in buying the compiled version. At that price I do not believe that you are taking a huge risk in buying the novel. And if you have concerns you can sample for less than a dollar.

Overall, I enjoyed The Deadliest Cast Member: Season One by Kelly Ryan Johns. It is an escapist action adventure with a touch of sci-fi that caters to Disney fans. I will admit this is one of the first books I have ever read that has Johnny Depp as a fiction character. But in the end, I found myself joining Johns in his enjoyable story. And I for one would like to see a season two at a later date.