Between Books - The Imagineering Workout 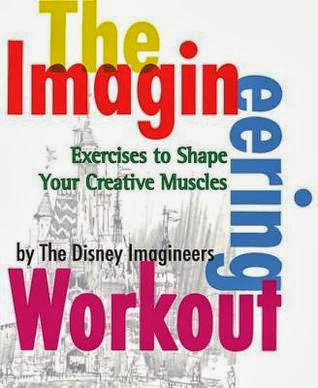 The Imagineering Workout: Exercises to Shape Your Creative Muscles by the Disney Imagineers is a collection of mostly one page essays that highlights different aspects of the creative process. Topics in the book range from using your creative license, considering the audience, storytelling, and finding inspiration. Contributors include Imagineers familiar to Disney fans such as Tony Baxter and Jason Surrell and many more who’s names are not as public. Along with the text many of the essays are illustrated or have boxes for readers to write notes to help sharpen their creative skills. The essays also have grey boxes with areas of emphasis.

This volume really is a companion to The Imagineering Way but with shorter essays. The topics and tone of both books are generally the same. The book is one that a reader could pick up and put back down to come back to later with the short essays. And it is a volume that one can search for just what you need when you need it. Honestly, I have been using it to gather quotes over the last few weeks to share at work and for a presentation. But the book itself as straight through read can be difficult as the writers switch from page to page. Overall, for anyone doing a creative task, which is really everyone, this book can provide inspiration but not detailed techniques on creating.

The Imagineering Workout is a short volume that provides inspiration from those who build the Disney Parks. It is something that can be a good creativity resource though it really is not a how to but inspiration. For those who want short and small packets of inspiration, this could be a good book to explore.
Posted by Between Disney at 7:42 AM