Between Books - Dream It! Do It! 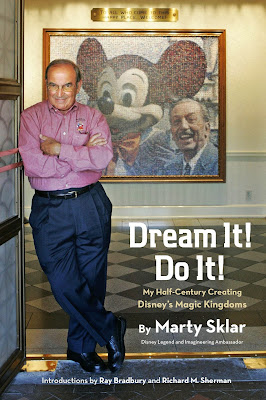 Disney fans have long anticipated the collection of legendary Imagineer Marty Sklar’s memories into a book. Sklar having a career that spanned the opening of Disneyland to retirement in 2009, has literally seen it all. And in many cases he was a participant. Yes, this is a book that Disney fans wanted and called for!

Dream It! Do It!: My Half-Century Creating Disney Magic Kingdoms by Marty Sklar captures the legend’s Disney memories. Sklar’s memoir covers his pre-Disney life and his long and distinguished Disney career. He is not able to cover every aspect of his Disney years, but he does give significant time to parks development including Walt Disney World, Epcot, and Euro Disney (or Disneyland Paris). He gives an insider look at presentations and creative sessions that helped build the parks we love. And most excitedly for Disney fans some reminisces include Walt Disney, for who Sklar wrote. Along with his memories, Sklar also includes business insights with a selection of quotes from Imagineering’s Conference Room walls and Mickey’s Ten Commandments and its expansion.

I am going to call this a mixed review for me. Honestly, I found the text hard for me to get into. And this made me more frustrated as I read. I really wanted to be drawn into it. The sad thing is I cannot explain why it was hard for me to break into book, which also frustrates. In the end all I can say is it did not draw me in the way I wanted it to. Also, the book reprints several stories that many Disney fans have already read or heard elsewhere. So every page does not provide new content to mull over, with some being Sklar putting in his pages stories told by others about him or by him elsewhere. But on the flip side there is plenty of new content for a Disney fan to enjoy. And it is amazingly honest content. I am shocked about the characterizations made about other Disney figures such as Dick Nunis and Roy E. Disney in the pages of a Disney Editions offering. Honestly, it makes one wonder why Disney Legal blocked the Ward Kimball biography! And the honesty is refreshing and good.

As I said, this text gives Sklar’s very honest opinions. And with Sklar having been on the the creative side it should not be shocking that he felt tension with Dick Nunis in Operations. But what was shocking to me was how far Sklar’s editors let him go in painting of Nunis of well…a bully! A comment about how Nunis abandoned Ron Miller definitely caught my attention though it was only a small line. And Sklar definitely chooses Michael Eisner in the struggle between the CEO and Roy E. Disney. But Sklar’s insights into Disney’s lack of creative input will make one think.

One thing I am glad that Sklar weighed in on was the Walt/Roy comparisons with the Eisner/Frank Wells relationship. Sklar interacted with both pairs. And he argues the relationship was not the same. With the Walt and Roy O. Disney dynamic, Roy provided little to no feedback on creative issues. Roy did not attend story meetings. Roy stayed within his business sphere. For Eisner’s tenure however it was a frequent occurrence that Wells attended creative meetings and would provide creative input. So the comparison breaks down as Wells used his years in Hollywood to serve as a sounding board on matters beyond the business. In short with Eisner and Wells the lines were more fuzzy.
Dream It! Do It! by Marty Sklar is a Between Books must have for Disney fans. And it is for the insights, opinions and perceptive that this Disney Legend brings. However, this is a book you need for the content, not because you cannot put it down.
Posted by Between Disney at 5:38 AM