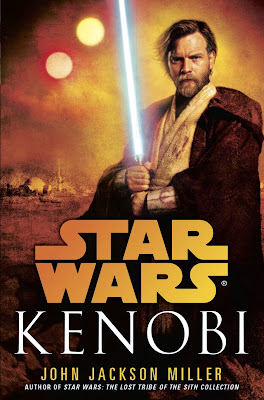 As I have noted before I have been attempting to find a Star Wars Expanded Universe title to recommend to a friend.  Mostly I have struck out.  Often some of the best Expanded Universe is either in trilogies or do not feature characters familiar to those fans who have only seen the movies. Being someone who first meet Ben Kenobi, or Obi-Wan Kenobi, on Tatooine and having many friends that met this Jedi Knight there I was hopeful the latest novel would be the Expanded Universe book that I could recommend.  But then my hopes have been dashed in the past.

The first quarter of Star Wars: Obi-Wan by John Jackson Miller focuses on the lives of those hardy folks who live in and around an one-store Tatooine oasis.  Orrin Gault is a wealthy moisture farmer who also leads a local posse of farmers and settlers who protect farms against the raids of Tuskens, or Sandpeople.  A'Yark is the local Tusken War Leader, whose tribe is slowly dying is hatches a desperate plan to save the Tuskens.  A'Yark has a number of secrets and is familiar with the ways of a newcomer in the area, known as Ben Kenobi.  Annileen Calwell is a widow and mother who runs her late husband's store, Danner's Claim.  Annileen is very interested in the comings and goings of this newcomer who always seems to be around trouble.  Those who live in and around the claim live a hard life that is underscored by Tusken attacks and underworld maneuvers.  And in the end, nothing is really what it seems to be in this Sci-Fi western.

For me this book started really slow.  It took me a week to read and the early part of the week was slow going.  Part of this was me asking where is Kenobi?  His early appearances are few and short as Jackson Miller makes his reader familiar with the new characters he has developed.  But by the weekend, the pace had quickened for me and the role of Kenobi, the character I wanted to see, had expanded.  By Saturday night I resented the fact that I was tired and could not keep my eyes open any longer to read the climax of the action.  When I woke up, the first thing I did was finish.  By the end of the book I was sold, and  I think the fact I reached for it first thing shows it had me hooked.

John Jackson Miller has past experience with Star Wars, but often in a different form.  He has written Star Wars comic titles which have been well received.  And he even slips in the names of his original Jedi characters.  Additionally, he has written short stories which were collected as Star Wars: Lost Tribe of the Sith: The Collected Stories which are highly entertaining snippets.  But all of these stories are generally set thousands of years before Star Wars: A New Hope with this being his first attempt at Original Trilogy characters.  And I would say that he does an excellent job writing this especially iconic character.

I do wonder if in the Disney era if we will see a Star Wars book like this in the near future.  Clearly it was written before the Disney purchase.  The story looks back and references heavily characters from Star Wars: The Clone Wars and characters that look into the past, not the future and Star Wars: Episode VII.  The shadow of Anakin Skywalker leaves a bigger impact on this story than infant Luke Skywalker or his uncle Owen Lars.  One might expect a story where Kenobi was interacting with the Lars' family.  I think that Disney would have preferred that story, focused on moving readers to their 2015 movies, instead of a series that they cancelled and movies produced before they bought the property.

I would recommend Star Wars: Kenobi to the casual Star Wars fan.  The book is well written and ends with a flurry of action that wraps the reader up.  But this comes with the caveat that it has a slow beginning as John Jackson Miller takes the time to introduce us to his all new cast of characters.

Posted by Between Disney at 5:38 AM