Between Books - Once Upon a Time: Shadow of the Queen 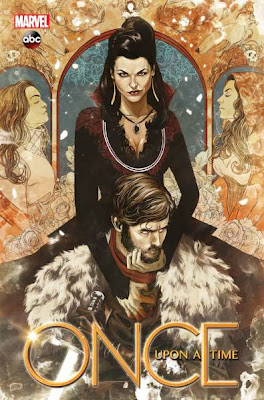 I have to make a confession.  My DVR is currently full of Once Upon a Time.  I want to watch it, I really do.  I do enjoy it!  But I have just not had the time to watch this Disney filled show. Ironically, I may not have had time to keep up with the show, but I grabbed a copy of Once Upon a Time: The Shadow of the Queen and devoured it as soon as it hit my hands.

This story is fully set in the fairy tale world before the creation of Storybrooke and after the Queen took the Huntsman's heart.  The story starts with the Huntsman attempting to gather tribute from a silver mining time which has been hit hard in recent years.  The tribute of the last bits of silver they own will likely mean they will not survive the winter.  The Huntsman with no heart tries to take the tribute without violence.  But his efforts are thwarted.  The Huntsman discovers that the silver is being used by the Evil Queen as payment to the werewolves if they track down Snow White.  We discover that the Huntsman has a prior relationship with the werewolves, that is complicated.  In the search for Snow White, the Huntsman reclaims his heart, meets Red Riding Hood, and has to make a sacrifice to set things right.

Really what I enjoyed the most about this book was getting to know more about the Huntsman.  His character was so quickly on and off the screen we never had a chance to get to know him.  And that short time on screen has created mystery around him.  Once Upon a Time: Shadow of the Queen really succeeds in making the reader admire the Huntsman in all of his struggles.  And despite not having a heart, the Huntsman seems to stay on a moral high ground during all of his adventures.  The only thing that I did not enjoy was the hint that the wolves the Huntsman had sacrificed to protect were werewolves.  And his relationship with the werewolves has eroded after he ended the Queen's service.  I would really prefer that they had not changed the wolves he lived with from regular wolves.

Once Upon a Time: Shadow of the Queen is a great graphic novel adventure sent in the Once universe.  It builds on a good foundation to make the Huntsman a complicated hero. With this story published by Marvel Comics, it is proof Disney synergy is alive and well.  And with a story based on ideas by Eddy Kitsis and Adam Horowitz, it is likely to please the biggest Once fan.
Posted by Between Disney at 6:20 AM

Email ThisBlogThis!Share to TwitterShare to FacebookShare to Pinterest
Labels: Between Books, Marvel Comics, Once Upon a Time, The Evil Queen, The Huntsman