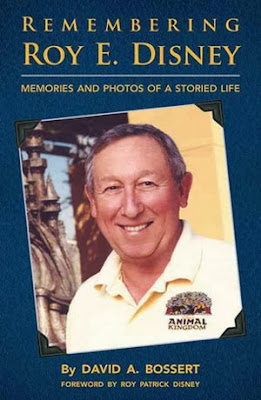 I will admit, with all my reading on the Eisner Era, one of the personalities that I have become very interested in is Roy E. Disney.  So, seeing that a book about the younger Disney was being released, it was a must own for me.  I really looked forward to reading a book that was focused on him instead of just seeing him as a supporting actor.

Remembering Roy E. Disney: Memories and Photos of a Storied Life by David A. Bossert is an account of Roy E. Disney written by a close colleague and admirer.  Bossert had worked with Disney on several projects and I believe honestly could say they were friends.  Bossert travels through Disney's life topically with chapters on sailing, Shamrock Air (Disney's private plane), Destino, and his late life divorce from Patty Disney and marriage to Leslie Disney.  The chapters are largely narrated by Bossert but also include personal accounts from figures like Stanley Gold and John Lasseter.  The book is also fully packed with personal photos from Disney's life, with nearly every page including an image.

I find this book mixed for me.  So, lets start with those things I did not enjoy.  When you include the forward the bulk of the first 39 pages explain how the book got written.  I understand that Bossert wanted to establish his personal view about Roy E. Disney and wanted to tell the story of publication.  But for a book that is only around 200 pages this was just too much explanation for me.  I wanted to get into the heart of the text, which really does do a good job of showing the relationship between Bossert and Disney.  Additionally, for a book that is very picture focused and with a Disney label some of the pictures are fuzzy.  The picture of Disney on page 38 is especially fuzzy and I have seen independent publishers do better.  It was really not what I expected from a Disney Editions book.

The good is really the discussion of Bossert's relationship with Disney.  Disney mentored Bossert.  So it is an account of one man's relationship with Disney for the majority of the book and not a historical biography.  The many stories of Disney's genorcity towards others including Bossert really makes one understand what kind of man Disney was.  And since Bossert often worked close with Roy E. Disney, one feels like you are getting an insider's view of Disney.  You feel like you were included in Disney's inner circle.  Bossert clearly admired Roy E. Disney and based on Bossert's accounts you can understand why.  Bossert really paints Disney as a regular down to earth guy who liked Costco hot dogs (one begins to wonder if his father and uncle's culianry choices rubbed off).

A storied life is a theme explored in the book.  Bossert shows Disney at work and discusses how he contributed to the production of animated features early in the Eisner era.  Bossert witnesses and recounts Disney rolling up his sleeves and working arm-in-arm with the story staff, pitching ideas and providing valuable and frank feedback.  As I think about the Marty Sklar comments that Disney was never in story meetings, it becomes clear that Disney was at least for a part of his Disney career.  A good example is Lilo & Stitch, where Disney's feedback saw a reworking of the story.  In the tradition of story, Roy followed his uncle more than his father in this aspect.

Remembering Roy E. Disney brings the reader close to the life of Roy E. Disney.  Author David A. Bossert worked closely with Disney and grew to admire him in these interactions.  As a reader it is hard to not get caught up in the feeling of respect that falls from these pages.

Posted by Between Disney at 5:54 AM