Between Books - Who's the Leader of the Club? 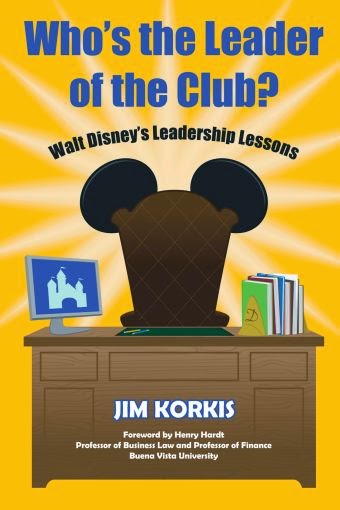 As I have dove deep into Disney books over the last several years it has become clear that many readers and writers would like to distill what made Walt Disney an effective learner. Typically these books come from the viewpoint of writers starting from an educational or business foundation.  But Jim Korkis has added to the debate using his vast knowledge of Disney history to distill principles found in Walt Disney's historical success.

In Who's the Leader of the Club: Walt Disney's Leadership Lessons historian Jim Korkis presents seven lessons of leadership based on Walt Disney's life.  He starts with brief discussions of who Walt Disney was and what type of leadership he displayed.  He also provides a summary of the differences between a leader and a manager contrasting Walt and Roy O. Disney.  Korkis then includes his seven lessons that include an emphasis on story, a concern with those you lead and most of all integrity.  Following the seven lessons, Korkis discusses aspects of Walt Disney's bad leadership, letting people go, developing other leaders and additional principles that can be seen in Disney's life.  Along with the main text, Korkis has sprinkled into his chapters quotes from Walt Disney, summarys of the principles being examined, and stories that underscore the principle being taught.

Again, I have several Between Books that are Disney business lessons.  But this book really struck a chord with me quickly.  It was Korkis' emphasis of story in the principles that caught my attention as a Disney fan.  But this story is not Immagineering's well crafted fantasy.  No, this story is the story that one creates as a leader and how one leads their life.  Korkis makes it clear that Walt was not the easiest of leaders to work for, but his people remain loyal to him decades after his death.  Much of this has to do with the simple fact that Disney believed what he said and acted with integrity.  He lived a good story.  And for us to be good leaders we must behave in a way consistent with the messages that we distribute to craft our own good narrative.

I really appreciate the fact that Korkis did not present Disney as an infallible leader.  The chapter on Walt Disney's mistakes is honest, frank and reminds us all that even great leaders have blind spots.  For example, Walt spared his praise to his staff.  Yes, he had reasons why he believed he should not easily handout verbal praise.  But as Korkis points out that could lead to resentment.  Korkis does not paint a picture of man who embodied all successful leadership standards.  Instead Korkis show a man who we can mirror in some areas, improve on others and perhaps acknowledge in yet others that we ourselves have problems.

I myself am a people leader, one who uses Walt Disney's example too much in my daily work life.  My team is very familiar with the yes if principle (Korkis, 88).  But sadly for my team Who's the Leader of the Club? has only reinforced my use of story language in my work life, as I will continue to remind those who work with me we have a great story to tell.  And having a great story really worked out well for Walt Disney!

Posted by Between Disney at 5:06 AM