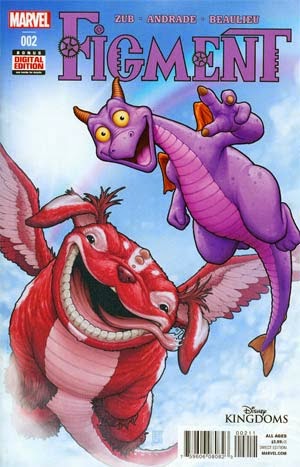 Would you like a copy of Figment #2.  If you do, good luck.  Marvel was sold out to retailers before the issue even hit the stands.  At least Figment #1 did not officially sell out until after its release date. Both issues are currently being reprinted, so you do have hope if you did not snag a copy yet.  I personally noticed that a major online retailer sold out before the release date.  I called my local comic shop which always has plenty of everything in stock, and found out they were done to one copy!  So I made the comic book lover step getting myself a pull list for the first time, and at the top is anything from Disney Kingdoms (Disney please take notice). Last month I had picked up copies for non-comics readers.  This month they were on their own!

Blarion Mercurial and Figment are falling.  Mercurial's attempt to turn mental power into reusable energy has instead ripped a hole in reality, and the two are falling, falling, falling.  The pair begin to explore this land that they reached through the power of imagination.  Meanwhile in London, Chairman Illocrant attempts to bring order to Mercurial's Integrated Mesmonic Converter, but something climbs out of the hole that our heroes fell through.  Meanwhile, back in the strange new land Mercurial and Figment make new friends and perhaps enemies.

Overall, this is an adventure story.  Our heroes explore and discover.  And the best part is that exploration includes Figment's infectious attitude.  He loves learning.  He loves this new place.  He finds it fascinating as everything is completely new in his short three day life.  How exciting it would be if we could capture some of his spirit.  I am not a Figment fanboy but I am digging him.  With Mercurial, I do not feel like he is Dreamfinder yet.  While Figment is curious, Mercurial is a little afraid.  He seems too conservative, perhaps the Chairman's desire for order is impacting him?  And if I could guess I would say a battle between order and chaos (or imagination) is coming.  And I am already picking my side.

There is a really cool element to this story that things that you cannot see have power and create imagination.  It is imagination that created Figment, and he is very alive.  He is more alive than many of us are!  But another peoples in this strange new land can create also with something that you cannot see but with a skill that most of us have.  Sometimes you do not need material to make matter!

The Between Tween loves this.  The Tween was attracted to Figment and he was the Tween's in character. The Tween identified with Figment not understanding big words and the spirit of optimism. But best of all  I am reading and discussing a comic with one of my kids.  And it was the Tween who was most nervous that we would not get a copy of this issue!

This is getting crazy, this Jim Zub story has to be sold at Epcot!  It only makes sense.  Kids meet Figment on the ride and get to take his origin home with him.  I am not holding out for a Museum of the Weird addition to the Haunted Mansions after Disney Kingdoms Seekers of the Weird, but this comic and its popularity has to lead to some serious consideration to get Dreamfinder added back to the park.  Kids come, ride, read and then want to come back to meet their heroes.  Now this is a plan I could see happen!

I really hope Disney is storyboarding a sequel, because this is a hit.  And one of Disney's toughest collectibles to get hands on is a comic.  You cannot buy it in the parks.  You might be able to find it in your local comic shop.  Okay I am sure that you can find it on Ebay.  But as a comics and Disney fan this is what I have been waiting for, a Disney comic home run!
Posted by Between Disney at 6:15 AM