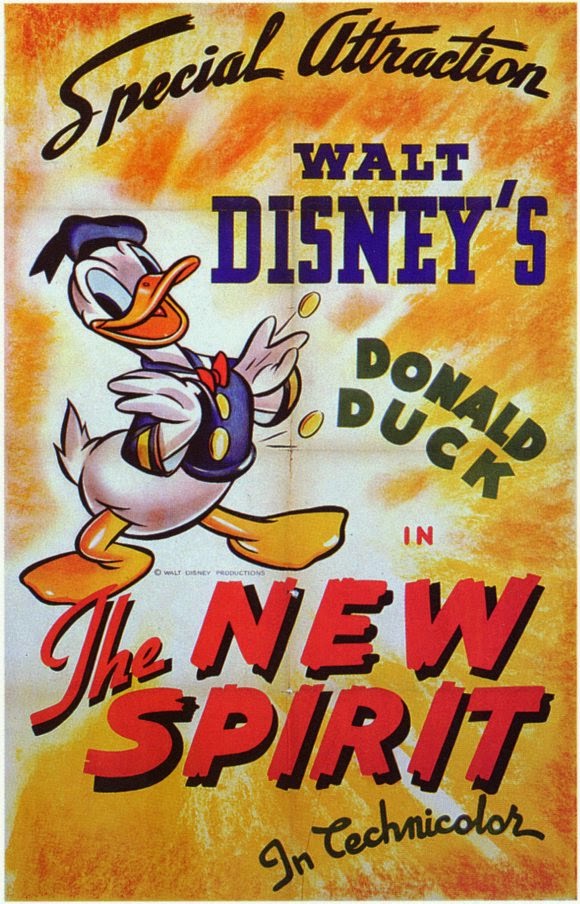 One of the highlights for me in David Lesjak's Service with Character: The Disney Studio & World War II is the discussion of the 1942 short "The New Spirit" produced for the U.S. Department of Treasury.  The goal for the film was to encourage the 15 million new taxpayers to pay their income taxes, seriously you could not prosecute them all if they did not pay!


One can see how this short would have cut into Disney short bookings.  It really is humorous and over 70 years later Donald is still a star.

Man I wish my taxes were that easy.  Did you notice that along with living in Hollywood as an actor that Donald Duck has adopted his nephews?

It is a little unsettling to me to see Disney animation being used to depict guns, battleships and bombers.  But it does make a point, your taxes pay for the war effort.  And I cannot get "Taxes to Sink the Axis" out of my mind.

Honestly, I do feel like this short was a success, despite the fact that it resulted in little profit for the Walt Disney Studios.  It is funny, well animated, has star power and shows how Disney supported the war effort during World War II.

Posted by Between Disney at 5:14 AM