Between Books - I Sing the Body Electric! 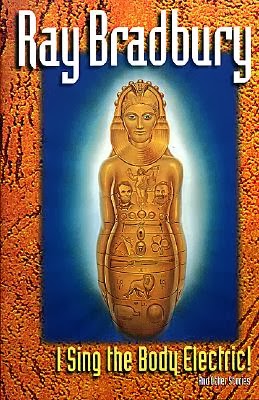 When I was in Junior High I discovered the writings of Walt Disney's friend Ray Bradbury and loved them.  It is fair to say I crushed the Bradbury contents of my school library reading every volume on the shelves in weeks.  And stories from volumes like The Martian Chronicles still capture my mind decades later.  Recently the Between Tween was introduced to this master of Sci-Fi through a school assignment and a request went out for more Bradbury.  Doing some research, I found a volume of short stories that had a Disney connection and that I had never read.

I Sing the Body Electric! by Ray Bradbury is a collection of the author's short stories.  The stories include Sci-Fi, horror and general dramatic themes.  As I read through the volume there were several tales I felt could have fit easily within The Martian Chronicles with the stories set on the Red Planet.  The title story, "I Sing the Body Electric" portrays a family that leases an robotic grandmother to fill an hole in their lives and the family's reaction to it.  The story feels like one that Walt Disney could have enjoyed with it focusing around both family and what you could claim is an Audio-Animatronic figure.  The story with the most Disney connection is "Downwind from Gettysburg".  This tale focuses around a man obsessed with Abraham Lincoln and his creation of an Audio-Animatronic Lincoln.  The figure is assassinated during one of its performances and an employee contemplates how to address the fact that Lincoln has been killed.  The story feels like Bradbury borrowed from Walt Disney himself, a man fascinated by Abraham Lincoln and who made the late president come to life.  And Disney had to face this murderous problem in real life, when the internal hydraulics would break and make the figure appear to be bleeding.  My favorite story, which surprised me, was "The Parrot Who Met Papa" which depicts the kidnapping of a bird who had memorized Ernest Hemingway's last and unpublished novel.

Overall, this volume was a Meh for me.  There were stories that I really enjoyed, but several just never really caught my interest.  I guess that is the challenge of a short story volume, not every story will connect with every reader.  The story I was the most excited about, "Downwind from Gettysburg", was probably over hyped in my mind and it simply did not hit the chord I wanted with it.  I have friends that love this tale, but since I had connected it to Disney I wanted to love not just like it.  Honestly, if someone asked me for a good volume to start with for Bradbury, I would not recommend this collection.  Instead I would tell them to start where I did with The Martian Chronicles.  And I am not passing this onto the Between Tween, who I think is a few years away from enjoying this volume.  Honestly, the Tween is caught up at the moment into action which is lacking from this thinking volume.

Should one read Ray Bradbury?  I absolutely say yes.  And for the completist, I Sing the Bod Electric! is a must read.  But for those who have glancing interest in Bradbury I would recommend exploring elsewhere, at of hopes of making fans of this master storyteller.  I do not want you to think I hated this book, I did not.  I just want not in love with it and it failed to capture my early wonder at Bradbury's words.  I think for a Disney fan there is some interest in this specific set of stories.  But I would recommend a borrow over a buy until one knows their personal thoughts on this late and great storyteller who helped imagine Epcot Center!
Posted by Between Disney at 8:58 AM