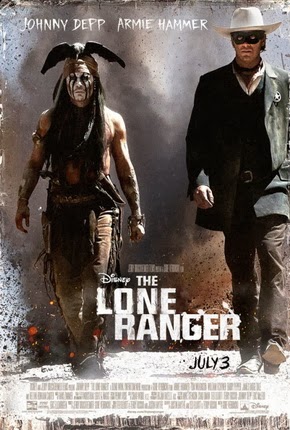 The Lone Ranger must be horrible!  Seriously, it was a box office bomb so it must be really really bad.  Estimates say that for Disney it was a loss of anywhere between $160-190 Million (capital M). But box office success does not mean good.  And I can thing of plenty of movies that were not good that were huge successes financially.  And others that the box office was a disappointment but a personal hit for me.  As many of you can guess, John Carter for me is a movie that I loved despite receipts.

So I was not out to get The Lone Ranger.  And I was willing and wanted to go see this western starring Armie Hammer as the masked lawman and Disney golden boy Johnny Depp as the Native American warrior Tonto.  But the summer schedule kept me out of the theater and by the time the summer was over we decided financially it made more sense to buy the movie instead of rushing into the theater while the film was on its way out (very quickly).


Like John Carter I enjoyed the escapist adventure in The Lone Ranger.  I still prefer  Andrew Stanton's sci-fi film on a critical level.  Which did not lose quite as much for Disney as Depp did in this adventure.  But like Stanton, Depp has a good Disney track record so he is allowed a Disney stumble, though the relationship with producer Jerry Bruckheimer is effectually at an end for new intellectual property.  I would say if you have not seen The Lone Ranger, grab some pop and popcorn and give it a chance some Friday night.  It might just be fun.
Posted by Between Disney at 6:32 AM