Between Books - The Disneyland Story 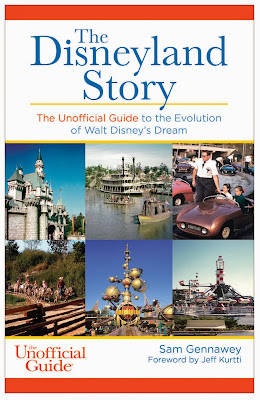 I loved Sam Gennawey's Walt and the Promise of Progress City.  So I was pretty excited about the idea of him writing a Disneyland history.  When I got my hands on The Disneyland Story, it looked small from the outside and thought it would take me less than 10 days to plow through this text.  Instead, it took me around 3 weeks (maybe more) because this exhaustive book is not one that a reader can or should blow through quickly.

The Disneyland Story: The Unofficial Guide to the Evolution of Walt Disney's Dream by Sam Gennawey is as promised an exhaustive history of the Disneyland resort including origins, evolution, trends and important figures.  Gennawey argues that Walt Disney had three children; Diane, Sharon and Disneyland.  And like all children, Disneyland grew up!  And it is the progress of the resort from a dream of a small park across the street from the Disney studio lot to a vibrant two parks, three hotels and a shopping district that it is today that Gennawey captures.  Gennawey discusses not just the pieces of Disneyland that made it from concept to implementation, but the stalled and failed plans like WESTCOT. And most of all, what Gennawey captures is a fluid changing park that was constantly on the move as it grew from infant hood to adulthood.

The Disneyland Story is a strong historical monograph.  It is well researched, cited and structured and demonstrates the maturity that Disney history has reached.  This book would feel comfortable sitting within a history classroom or in the history section of the library.  It is not a guidebook, though it is connected to The Unofficial Guide.  It is a serious and thoughtful history down to its thesis that Walt Disney had three children with one being a theme park.  And as a work of history, it easily could be used as a guide in teaching a course on the history of Disneyland or the life of Walt Disney.  And I expect that it will be used to help support future Disney historical projects, even if it is only to examine the large bibliography.

The writing itself is clear, but dense.  The book's size is misleading, as every page is packed with type.  And because of its density I would not call it a easy vacation read.  This is a book, an essential Between Book, for serious fans and researchers of the Disneyland Resort.   I found that my reading pace slowed as I took in the entire story of the park, and that pace was due to the amount of information presented to me.  But though it was a slow read, Gennawey's writing was quite clear and did not hinder the large amount of information bombarding me.

If anything, based on my own academic background, I wish that Gennawey had reminded us more frequently of his thesis of Walt Disney's three children.  I can see how after Walt Disney's death that the thesis may have weakened due to a lack of involvement by the creator.  However, children, including Disney's own, do lose parents and continue to mature and grow as they reach reach middle age and beyond.

Yes, if you are familiar with Disney history there are plently of facts that you already know.  However, there are more you do not.  I found myself amused over some of the little things, such as the compensation that Art Linkletter received for hosting opening day.  And I am sure he was well compensated for years after (like a decade).  Additionally, having all of Disneyland history in one volume really underlines the vast amount of change that has occurred within Disneyland.  Disneyland really is a living organism and it is far from a monument.  It changes constantly, which makes it difficult to complain about future changes.  Additionally, Gennawey provides a history of something often neglected, the story of the Park's relationship with the city of Anaheim itself.  The addition of Walt's Park greatly changed the sleepy rural community into the metropolitan area it is today.

If you have a Between Books library, you will need a copy of The Disneyland Story.  It is the most affordable and complete Disneyland history currently available.  Basically if you read books about Disney history, well you need this volume.

Review Copy Provided for Purposes of Review
Posted by Between Disney at 5:49 AM