Dreaming Disney - Mickey Through the Decades 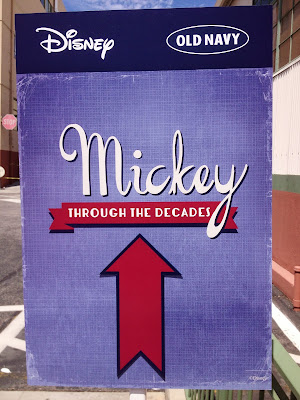 I live Between Disney. And in Betweenland there are some things that are just not going to happen. Though I will admit that I have lucked out and been able to schedule our family vacation to Disneyland over the last few years, so I ask for no fan pity. Some things are just pipe dreams for me. For example, I doubt I would ever be able to go to a D23 Studio Tour. I simply cannot imagine timing my vacation perfectly to match up with the schedule. But hey, I am still a lucky guy and having my schedule coincide with a D23 Expo once was probably as lucky as I was going to get.

But lightening struck again when D23 put out notice for sign-ups to attend Old Navy’s Mickey Through the Decades Collection at the Walt Disney Studios event. And best of all, it was scheduled for a day where the Between Family would not be going into Disneyland on a already scheduled vacation!

The day started with us renting a car and gulp driving through the LA area traffic. We left early to give ourselves plenty of time. This meant we had time to explore. We drove around Griffith Park, where Disneyland as an idea was germinated. And after we found the studio I searched the GPS for close by attractions and found the Hollywood Sign. With the sign adventure in our rear view mirror the Between Family was in full tourist mode when we checked in at the studio.

The event itself was somewhat of a free for all, with you choosing between several activities. There was one area where press photographed the three celebrities sporting Old Navy’s new Mickey Mouse tees. The three celebrities Jennifer Love Hewitt, Constance Marie and Brooke Burke mingled with the press, but really did not spend time with the other invitees. Though I did see some of their kids enjoying the offered activities. They took photos, answered press questions, but really did not interact with the fans. In fact I never saw anyone ask any of them for their autographs.

It was everyone else, like us, who got to have fun. The invited guests were given a voucher for a free t-shirt. Since Jeffrey and other staff pointed out there were plenty of t-shirts we skipped over the crowd of people at the Old Navy tent. Honestly, this may have been a mistake since there were a limited number of shirts in each style and the Between Family had to chose from the picked over remains. We instead went first to have our photo taken with Mickey, in a 50’s costume. He would be relieved by Minnie throughout the event with her 50’s themed dress also.

After our picture with the main mouse we jumped into the line to get a Disney artist to draw a custom Mickey sketch for us. You could get Mickey or Minnie. As I stood with the Between Kid, the artist asked him what picture was desired. The response was baby Mickey, which the child ahead of us had gotten. The artist instead described a Star Wars Mickey Mouse. The Between Kid said no, baby Mickey please. So the artist laughed and said let’s do baby Mickey for you but Luke Skywalker Mickey for dad! He saw the gleam in my eye! So of course I loved it and was thrilled to get my own custom Mickey/Star Wars mash-up. (Note, I did ask later a character artist in the park if they could make me an Agent Coulson Mickey. He stated currently Marvel is not included in what they can produce).


After the Between Kid got a Mickey temporary tattoo and grabbed some coloring sheets, we ate. And we ate in the Commissary! The food itself was burgers and hotdogs from a caterer. But it was super fun to be able to say that we were eating inside the Disney Commissary. And sitting inside away from the heat, we saw the Saving Mr. Banks trailer for the first time.

After eating, we went into a conference room to watch some of the new Mickey Mouse shorts. We were given popcorn, candy and bottled water. They were bragging that one of the shorts had not been seen yet. But I could not tell you which one since we had not seen around three of them.

Oh, and now the real fun began. When we left the Commissary building we noticed some guests walking around. So we tested our limits. We walked down to Pluto’s Corner and snapped some pictures. And since we made it that far, we took some pictures of the Animation Building. The Between Wife shook her head as I pointed out to the kids that this was the building that Walt Disney worked in. And then we walked a little further to get good pictures of the Team Disney Building. And since we were there we wandered around Legends Plaza, with me in full geek mode as I put my hand in the impressions left by Marc Davis, Roy E. Disney and others. So we may never be able to go on the official Disney tour. But it our unofficial self guided tour made the trip to Burbank.


After we left the Studio and went to the beach. So it was an awesome day overall.

Yes I live Between Disney. But you never know what you may find Disney Adjacent until you open yourself up!