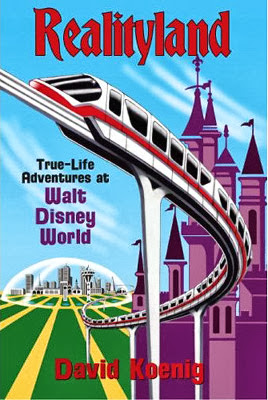 One of my favorite Between Books is Mouse Tales by David Koenig. So when I saw a Walt Disney World book written by Koenig, it was a must have for my shelves. And I hoped that the Florida version of the book would live up to the two volumes Koenig has offered up on Disneyland. Would this volume live up to the excellent Disneyland books?

Realityland: True-Life Adventures at Walt Disney World by David Koenig provides an unofficial history of the Walt Disney World Resort from Walt Disney’s inception of the idea of an East Coast park up until the opening of the Animal Kingdom Park. The text flows forward chronically, not topically, as Koenig walks his readers through the building of the resort, the opening of the Magic Kingdom Park and the expansion into Epcot, Disney-MGM Studios and the Animal Kingdom. Koenig’s focus is on the less obvious bits of history such as accidents, lawsuits and backstage incidents. So Koenig’s writes for example not on the design of the Contemporary Hotel, but on the work theft and union troubles that surrounded its actual construction.

Like with Koenig’s other books, Realityland is highly enjoyable and easy to read. I would say this is more of a chronological history than a topic one. This volume has no chapter on the Walt Disney World version of the Jungle Cruise. The focuses here tend to be more related to what could have been found in a newspaper or police blotter than what could be gathered in an informal and unmonitored interview. Though his research does include those former cast member interviews. With that in mind, the text tends to be more familiar and duplicative of what can be found in other Walt Disney World history books. Though I did highly enjoy the construction accounts which were more off the record than other sections of the book in my mind.

It really was the construction details of the park that I enjoyed most. Koenig details the union troubles that Disney faced in the Florida construction. There was a lot of theft by workers, something that lead to cost overruns and over purchasing to deal with material losses. Additionally, the unions required their workers be present and paid when specialists were needed from outside. And with so many workers on site, there was Sopranos style corruption, such as non-existent workers on the books, that most would never associate with a Disney park.

The on property deaths and major accidents are also interesting. I would say that the most at risk are cast members, where the majority of documented deaths have occurred. But being a small child is also a risk! With such a large property, deaths will occur. But for some reason I do not believe that detailing of these events is up to the same level as Mouse Tales. But then I am quibbling over really good versus excellent.

Realityland is a must have for Between Books libraries focusing on the Walt Disney World Resort. Koenig is clear and helps shed life on the history of the parks that is rarely spoken of. But I still stand by Mouse Tales as my favorite Koenig book. But then it was also my first!
Posted by Between Disney at 5:43 AM