Between Books - 3500: An Autistic Boy’s Ten-year Romance with Snow White 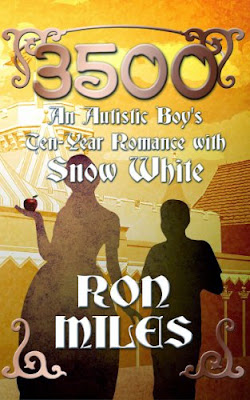 Most guests who have visited a Disney Park would probably say that their vacation impacted them, be it for good or for ill.  By not many can claim as a profound experience with a Disney attraction as Ron Miles and his family.  His son Ben rode the Magic Kingdom’s Snow White’s Scary Adventures 3,500 times, a journey that greatly changed everything for Ben’s family.

In 3500: An Autistic’s Boy’s Ten-year Romance with Snow White by Ron Miles, the author invites his reader to join him in recounting his son Ben’s relationship with Snow White.  Miles tells of the story of his young family, beginning with his wife Sara delivering their son Ben on Christmas Day 1993.  Overtime it became evident that developmentally there were concerns and Ben was diagnosed with Autism.  The strain of being a young couple, work issues and parenting a child needing extraordinary care and support eventually led to the couple’s divorce.  Noticing an affinity for Disney movies and merchandise, Ben’s parents decided to take him to Orlando to visit Walt Disney World in 2002.  What they witnessed was their child making developmental strides that they had not witnessed at home in the Pacific Northwest.  The two parents were so impressed on the impact that Walt Disney World had on their son, they picked up their households and moved Ben to Orlando so he could visit the park on a regular basis.  Miles’ outlines the routine they followed within the park and how Ben became infatuated with Snow White’s Scary Adventures.  The highlights of the book include accounts of Ben’s 1,000, 2,000 and final ride on the last day of the extinct attraction’s operation.

Honestly, this book made me tear up a little.  There are times I read it thinking, I’m a tough guy this stuff is not going to pull at me!  But it does.  Any parent reading the book and seeing the progress that Ben makes as he interacts with Walt Disney World is sure to have a emotional reaction.  As Miles points out, his son is not “cured”, but observing Ben’s reactions is truly magical.  And having worked in the Special Needs community in the past I found it easy to understand both the joy and pain of caring for someone with special needs.

This book may at times read like a detailed trip report, but it is not just about Snow White.  It is also the story of coping.  Miles discusses the pain of divorce, and finding ways to accommodate your former spouse.  He details finding love again!  Miles’ puts his reader on edge sharing about Ben’s trips to the hospital and the helplessness one can feel when your child is hurting and cannot communicate their needs.  This is not a story about Walt Disney World.  This is a story that occurs within Walt Disney World about people with real problems.

One aspect of the Disney Parks that jumps out to the reader is the cast members.  Miles recounts the magic that the cast created for his family.  The highlight is the effort to reach trip 3,500 before Snow White’s Scary Adventures closed, an achievement that required cast intervention.  And the meetings between Ben and Snow White are priceless.  The efforts that the cast took to help Ben transition as the ride closed are remarkable.  The cast really is committed to making magic.

The hardcore Disney parks fan may not find the history and trivia they may be looking for in 3500.  But this is a very human story.  And it is story that one can more easily pitch to non-Disney fans for the human interest story.  But you may want to grab a tissue as you reach the end of the book!

Posted by Between Disney at 6:40 AM