Between Books - Amber Earns Her Ears 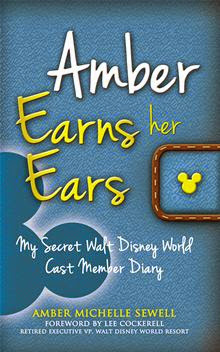 Amber Earns Her Ears by Amber Sewell shares with readers the experience of working in the Disney College Program.  It is a memoir that follows the actions of an introverted young lady as she works for Disney not once but twice after high school.  It is friendly and interesting story without the questionable material that might keep you from letting a younger reader from enjoying the title.

Sewell recounts two stints as a Disney cast member at the Walt Disney World Resort, starting her story in 2010.  The first tour was under the CareerStart program, no longer active, which allowed the applicants to submit their materials while still in high school.  During her CareerStart program, Sewell worked at the Electric Umbrella in Epcot.  With her return to the park, Sewell was part of the Disney College Program and worked in merchandise at Epcot.  Sewell outlines how one applies and what they can expect in the interview process.  She then discusses the training program that cast members go through and how living arrangements are setup.  And she discusses in the depth the life of a cast member both at work and play.  She also goes into depth about the disillusionment of young cast members as the magic wears off during their programs.
Honestly, I could let the Between Tween read this book.  I cannot say that about all Walt Disney World memoirs, with many of them seeming to stress the party and alcohol atmosphere that exists everywhere young people gather.  This is closer to my own college experience, one where parties with alcohol and intoxicated people existed, but where most of the social gatherings were largely innocent and silly.  I think it helps underscore the point that every cast member is not a party girl/boy, an impression that other memoirs can give.  Instead those highlighted in the book are people that are more like my history than other memoirs show.  Of course, that could be because both Sewell and I are introverts.  And the fact that Sewell and I have both written for Celebrations makes it easy for me to relate to her.

I think the aspect of the book that many young people may be interested in is the “how to” aspect of the book.  Sewell walks readers through her application, interview, housing and training experiences.  This would be a great and easy to read primer for those interested in the Disney College Program.  Yes results may vary, but Amber Earns Her Ears provides a good baseline expectation of the process end to end while still allowing the unexpected to happen.  And it may help parents feel more comfortable in allowing their young college aged adults venture to Orlando.

It is interesting though that like more cynical memoirs Sewell  shares the disillusionment of working Disney experience.  It becomes clear that despite one’s level of fandom, working for the Mouse is a taste that not everyone acquires.  And when comparing Sewell’s two experiences it becomes clear that even working in the same park can lead to a very different experience.  Like all jobs, perhaps it is about the people you work with!

The book itself is very easy to read.  Sewell’s writing flows well and one can read it as a vacation book, like I did.  The chapters read like edited blog posts, which is the origin of many of them.  In fact the second half of the book reads like it is real time instead of a historical account.

Amber Earns Her Ears by Amber Sewell is a pleasant and easy to read memoir about working at the Walt Disney World Resort.  It adds to the Between Books library by outlining the Disney College Program experience.  And it is a memoir that a parent can feel good about letting a minor read as they dream about their own future.