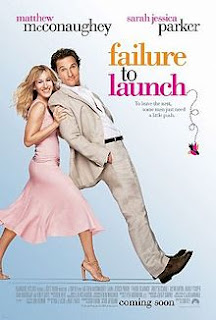 Well, I guess I am about to lose some loyal readers!
Not every movie I watch is a Disney movie.  There is in fact a secret place in my house with a Matthew McConaughey romantic comedy library.  Disney fans may know that he plays Angels outfielder Ben Williams in Angels in the Outfield.  This library is called upon when something sweet, mindless and fun is needed to entertain the Between Adults and the Between Wife is not in a mood to watch things explode.
But I have a new problem!  I can’t watch any movie without evaluating it for Mousiness.  It’s a gift and a curse! So when recently viewing Paramount Pictures’ 2006 Failure to Launch, I saw it’s total Mousiness  In this romantic comedy, McConaughey stars as an adult still living at home in his 30s. His parents hire Sarah Jessica Parker’s Paula to simulate a relationship with McConaughey’s Tripp so he can gain the self-esteem needed to move out on his own.  Of course, complications occur along with a possible real romance.
Now, just because a movie is Mousey that does not mean I would recommend it for children.  In fact, the Between Kids were sent to watch the Disney Channel while the adults took in the Mousey Romance.  I present to you my attempt to balance out all of the Mousey superhero Mousey Movies I have posted before.  Betweenlanders I give you Failure to Launch:
·         Sidekick:  Justin Bartha plays Tripp’s “geeky computer guy” friend Ace.  Bartha would also take on the sidekick role for Disney in Nicolas Cage’s National Treasure and National Treasure: Book of Secrets as computer geek Riley Poole.  Personally I like both Ace and Riley as they seem like guys I would hang out with while I doubt I could keep up with the super cool Tripp.  I almost jumped on another moment as potentially Mousey as Ace’s first date with Zooey Deschanel’s Kit occurs at an Aquarium that reminded me of Epcot’s The Living Seas with Nemo and Friends.

·         Stuffed with Fluff: Speaking of Kit, Deschanel has her own Disney ties.  She appears in the Disney and Walden adaptation of the literary classic The Bridge to Terabithia, which makes me sad.  So I have never re-watched it.  I am more familiar with her work on the Winnie the Pooh soundtrack which includes her distinctive voice covering the theme song“Winnie the Pooh” with her band She & Him along with two other tracks.

·         Out of the Lab:  We are introduced to Tripp’s “nephew” Jeffrey playing video games with Tripp’s friends.  As I looked closely at Jeffrey I kept thinking this youngster really looks familiar!  After a few minutes I realized that Jeffrey was the lead character Leo from Disney XD’s Lab Rats played by Tyrel Jackson Williams.  Williams has a small but important role as it helps explain why Tripp still lives at home.

·         Bear Bottoms:  I have to warn you, there is nudity in Failure to Launch.  National Football League legend and Hall of Famer Terry Bradshaw shows his bare bottom to the world.  Honestly he seems as comfortable with displaying his bottom as the triplets in Brave.  And he would fit in with King Fergus and the clan leaders, swapping some warrior or football tales.
·         The Rat:  Tripp is not Paula’s only client.  She meets with a young man we assume is a new client on their first simulated date.  He speaks from his heart; the original Star Wars movies are superior because they are all about storytelling.  I am sure many of us would agree!  The client is played by Patton Oswalt, who knows about passion having played Remy in Ratatouille, a rat with a heart for cooking!

·         The Rifleman: Actor Rob Corddry plays a gun salesman who Kit visits to help with a bird problem.  Corddry would be a strange fit for a Disney movie, having starred in movies like Hot Tub Time Machine.  But we would be wrong!  Corddry appears on the special features of The Muppets in a deleted scene as Sleazy Superman in front of Grauman’s Chinese Theater.

·         The Grand One: The moment that will make any Disney fan sit up is Tripp’s first date with Paula.  It occurs on a boat named, Grand Imagineer!  Most Disney fans would assume that the Grand Imagineer has to be Walt Disney.  But we would be mistaken this time.  The boat in the film is actually named after Hondo Crouch a humorist, rancher and poet from Texas who died in 1976.  My attention was had, but the moment was not as Mousey as I wanted.

Alright Betweenlanders we have proved a romantic comedy can be Mousey.  But I believe it is time for us to get back to animated and action packed Mousey Movies.  But remember Between Husbands, if you look close enough you may find the Mouse in those movies we watch, and occasionally enjoy in shame.

My review of The Disney Revolt