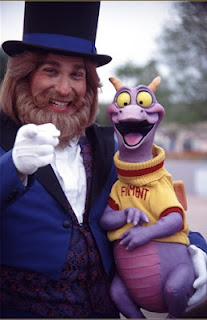 Once I picked up From Dreamer to Dreamfinder I found myself looking for videos of incidents Ron Schneider included in his memoir.  One of the first I wanted to see was his October 1982 interview with Imagineer Barry Braverman on The Today Show being interviewed by Bryant Gumbel.

Schneider describes the interview as, “The wig and hair were all wrong and I’m pushing too hard…like a new employee on his first day (Schneider, 100).”  Have a look for yourself:

I am no Dreamfinder expert, but I do agree that the beard looks as if it could fall off any moment.  And I know understand Schneider’s comments in his memoir about his early fake arm and how it did not look correct.  I think for me my biggest concern is that Gumbel treats Dreamfinder as a created character and not a living being.  But overall with failing beards and all, this interview would have gotten my young self excited if I had seen it for this new thing called Epcot.
Posted by Between Disney at 8:41 AM