﻿﻿﻿
Sometimes it is easy to forget that there was a time when some tips that were second nature to you were not a no brainer.
So today’s public service announcement is the following, if you are buying Disney movies for your home collection you may be eligible for free stuff.  And let’s be honest if you have children you have probably already have a movie collection with a few Disney movies and you may be eligible for free stuff right now.
Did I mention free.  Free is good!
In most Disney DVD and Blu-Rays you purchase you can find on the outside of the box a Disney Movie Rewards symbol.  If you see this symbol, you will find on the inside a sheet with a code which you can enter at www.DisneyMovieRewards.com for a specific number of points.  Points vary by the format you have purchased, with more expensive formats generally having more points assigned to them.  You collect your points on the website and redeem them for rewards that range from a few hundred points to 25,000 points.  Though for most folks the most desirable big point item is the 15,000 point Walt Disney Studio private tour.
So far what have I gotten?  Well, one thing I have gotten is coupons, coupons for buying more movies.  Through Disney Movie Rewards, Disney has promoted coupons to upgrade old VHS or DVD copies of movies to Blu-Ray.  And to be honest these coupons have been nothing to sneeze out with savings from $5 to $10.  Our upgraded copies of Toy Story and Toy Story 2 were downright cheap when combined with an in store savings.  And recently they promoted a coupon for John Carter at $5 off, which again is a significant amount to a busy family.
There have also been offers specific to specific home video title.  For example we have redeemed for the cost of shipping, or a small fee, a stuffed Bolt and another time Tinker Bell charms.
But then we have not even spent any of our points yet.  It’s the redemptions that we have been the most excited about.  We have been saving for years for an item that we seem to miss every time it is offered.  But I promise you someday we will get it!  But we have still had some nice items with shipping costs paid by Disney.  These have included a youth sized Cars 2 hat and a massive Cars LED sign.  The sign was something that we got for less than 1,000 points as part of a Christmas promotion.  We thought it would be small wall light.  Instead two days later we received a very unique LED sign.  It helps give one room of our house a really cool Cars feel.  And we have been known to drag guests past the sign. 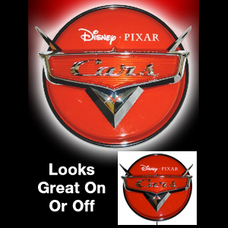 I think one question, especially for point hoarders like me, is when will it end?  Well I guess technically the program could end anytime.  But since it has continued for the last several years I hope this loyalty program does not end anytime soon.  Seriously, I am hoarding points!  Please don’t end!
So why a public service announcement today?  Earlier this month I told a co-worker about the program.  She commented they had a few movies, but would be shocked to find out they had any points of significance.  Well her family had nearly 2,000 points sitting in their movie collection and was looking at some fairly nice rewards on the website for them to choose from.  So be aware, you could have the cost for some fairly nice free, did I say free, stuff hiding in your movie collection.  And at the very least you could be denying yourself some coupon savings on movies if you are not signed up at www.DisneyMovieRewards.com.  It is always a bonus when you can dream of Disney free or discounted!
Posted by Between Disney at 11:16 AM