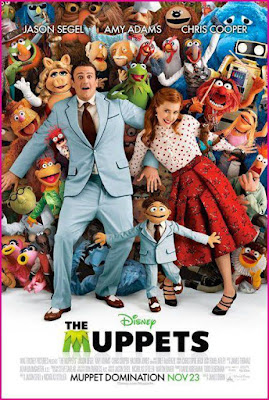 I’m one of those adults like actor writer Jason Segel who grew up with the Muppets.  One of the earliest reports I remember writing for school was an Elementary music report on a musical.  I chose 1979’s The Muppet Movie and with the help of notes on an eight-track cassette, yeah eight-track, I presented my teacher with what I thought musical theater was.  But I also admit, over the years the Muppet movies have fallen flat for me.  Perhaps it was Muppets’ Wizard of Oz, which my kids love, which lead to me personally writing off the Muppets as must see media.  But after seeing The Muppets, all I can say is thank you Jason Segel for helping Disney bring back this franchise to the big screen.  Seriously 13 family members representing 3 generations left the theater all singing “Mahna Mahna” together.
I think sometimes we forget, even with Muppet*Vision 3D, that the Muppets are owned by Disney:  And like any good Mousey movie, one which pretty much every department of the company promoted, Michael Eisner would be proud of the synergy found in The Muppets:
·     Amy Adams: Amy Adams takes her second spin as the female lead in a Disney movie.  For me her first turn, Giselle in Enchanted, firmly and personally placed her in the princess pantheon forever.  For me her song, “That's How You Know” from Enchanted will always serve as the best example of what a Disney princess would be like in our world that I have ever seen.  It just screams Mouseyness to have a Disney princess in the female lead.

·     Neil Patrick Harris: NPH, is there anything you can’t do?  The Disney California Adventure California Screamin’ barker and Disney fan boy delivers one of the best lines of the movie.  No spoilers here!

·     Alan Arkin: Mr. Arkin playing a tour guide is not only a distinguished actor, but for fans of Disney’s Santa Clause 3: The Escape Clause, Arkin is also Father-in-Law Christmas.

·     Zach Galifiankis: Well clearly I’m making leaps now arguing that Zach Galifiankis makes The Muppets mousey!  Nope, he stars as the human lead in Disney’s 2009 G-Force.  It may sound corny, but it’s actually a pretty fun movie.  His Hobo Joe in The Muppets seems to fit his other big screen somewhat silly roles more than his very understated Ben from G-Force.  But then you probably need to be understated if you lead a special forces team of rodents!

·     Product Placement:  Let’s face it, films advertise products.  And you can spot advertisements for other Disney productions throughout the movie. Conveniently the two most obvious were released on Blu-ray and DVD when The Muppets was released.  So go get your copy of Winnie the Pooh.  And you can’t escape Mater and Cars 2, with its poster coming into screen over and over and over again.  Finally, I found myself considering an iPad2 after seeing the prominent billboard in the background. Was this a tribute, favor, or paid advertisement by Apple, whose found the later Steve Jobs was Disney’s largest shareholder during production of this movie.
The Muppets are back.  Kermit, Missy Piggy and the whole game are relevant again.  And I’m hoping this just means more Muppet goodness in the future.  And they want us to know, the Muppets live at the House of Mouse.

For more Muppet Mouseyness see "Mousey Movies - The Muppets Addendum."
Posted by Between Disney at 1:46 PM