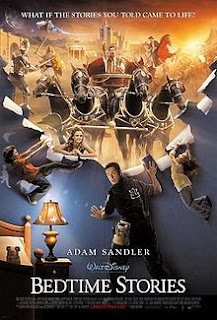 Christmas 2008 was to be an important moment in the life of the Between Family.  We were not traveling across Between Disney for the first time ever and were going to spending Christmas at home.  As part of my master plan the family was to go see Disney’s new Adam Sandler movie Bedtime Stories.  I was so excited for this family film that I was sure would please almost everyone in the family.  The idea of Adam Sandler’s Skeeter telling his niece and nephew bedtime stories that came to life was something I really wanted to see.
We got the desired family time in 2008.  We all got so so so sick.  Everyone laid around the house for the entire day watching Disney movies and trying to recover.  And we waited until Bedtime Stories came out on DVD that spring to watch it.  Still because of the 2008 Christmas plan not to be, I will also associate this movie with Christmas.
Bedtime Stories is very clearly a Sanderly movie (yes, another made up word).  It’s filled with co-stars familiar to anyone who has seen an Adam Sandler movie including Rob Schneider, Allen Covert and Jonathan Loughran.  But it’s also a very Mousey Movie with plenty of Disney references for fans.
·    Skeeter’s niece and nephew’s first exposure to television includes The Suite Life of Zack and Cody on the Disney Channel
·    Skeeter’s first bedtime story portrays him as a knight.  Keri Russell’s character Jill in the story is seen as a Tinker Bell like fairy and an Ariel like mermaid.  In the same tale Guy Pearce’s Sir Butkiss claims he can get admirers tickets to The Lion King.
·    Actress Teresa Palmer pays potential Skeeter love interest Violet Nottingham.  Palmer can also be seen in Disney’s 2010 The Sorcerer’s Apprentice which was inspired by the classic animated film Fantasia.
·    Actress Aisha Taylor plays Donna a former girlfriend from Skeeter’s past and the mayor.  She’s used to being in authority having played Mother Nature in both The Santa Clause 2 and The Santa Clause 3: The Escape Clause.
·    In one dream sequence, Skeeter and Jill are seen dressed as Prince Charming and Cinderella.
·    The best Mousey moment involves Skeeter’s space themed bedtime story.  As he fights Guy Pearce’s character in an arena within a Death Star shaped space station a familiar face sits in the crowd.  Toy Story’s Buzz Lightyear joins the audience in taking in this pivotal battle.

For me Bedtime Stories has the feel for Christmas.   You may not agree, but you have to admit that it is also one Mousey Movie!
Posted by Between Disney at 7:43 AM