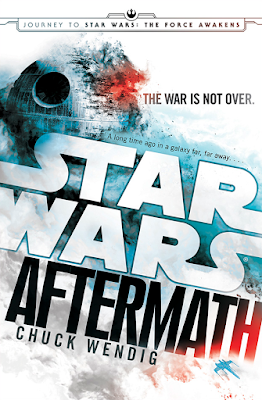 I continue my quest to prepare for Star Wars: The Force Awakens with Aftermath by Chuck Wendig.  I started the book knowing this was official canon that also serves as part of “Journey to Star Wars: The Force Awakens”.  And I opened the book excitement to find out officially what happened to Han, Luke and Leia after the Battle of Endor.  But what I got was very different.

I have decided to write this synopsis from the window of a casual Star Wars fan.

On a world you don’t know in the Outer Rim, the Empire attempts to regroup after the loss of the Emperor, Darth Vader and the Death Star.  Wedge Antilles travels to this world in a scouting mission and stumbles into the Empire’s planning conference.  Imperials you don’t know capture the Rebel hero and dream of a Imperial tomorrow.  On the planet you don’t know, a Rebel, bounty hunter, former Imperial and streetwise kid, all of which you don’t know, struggle to make their way in the galaxy while also potentially sabotaging the Empire’s talks.  These heroes you don’t know are the only hope for Wedge’s freedom, a hero you might know.  Interspersed in this adventure are interludes from throughout the galaxy as people you mostly don’t know, but hey Han and Chewy show up, are forced to answer issues caused by the fracturing Empire and the rising New Republic.   One thing is made clear, the struggle you know is not yet over!

I will continue to argue that Star Wars works best with a visual element.  And with all apologizes to Chuck Wendig who was given and job and did his job, Aftermath has this problem and more working against it.  First, Wendig puts us in a new world and uses aliens where we have to rely on either our imagination visual reference or the internet to create a picture of the mind.  But unlike an original science fiction novel our mind pushes for a visual reference for the mind’s eye.   Our minds know this galaxy and pushes to provide the right image instead of accepting imagination.  Second, Wendig is largely using original characters to this story, this trilogy wow really, so readers are left frustrated wanting to spend time with original trilogy characters who are largely absent.  And finally the plot is not what a casual Star Wars fan would want since it is really about this new group of heroes for which we have no context.  The blunt reality is Wendig’s book would be a good science fiction story.  But it fails in meeting the needs of causal and hard core Star Wars fans.

What I really want to know is what happened after Return of the Jedi.   And Aftermath gives us a big picture.  The Empire is hurt but not eliminated.  And a power vacuum has been created with multiple voices trying to fill the void.  The Rebel Alliance is also in transition as they move from a guerilla underground movement to a legitimate authority in several planets and systems in the universe.  Both sides are scrambling to keep or take power.   In short there is enough contested territory that the war is far from over.  And so I can use this to enter the movie with the sense that a long struggle continued or even continues into the future.  The other aspect I take from the book is the ideas that were found in the Expanded Universe to be frank with a New Republic, Mon Montha as the key political leader, Wedge Antilles as a flying legend and Imperial Moffs and Admirals fighting to become key political players.

Aftermath by Chuck Wendig is set to prepare me for Star Wars: The Force Awakens.  In the end it was largely failed for me.  What could be a solid science fiction story is high jacked by the constraints of Star Wars.  And of course there is the slight problem that it does not even close to meet the expectations of casual and even hardcore fans.

Posted by Between Disney at 5:45 AM