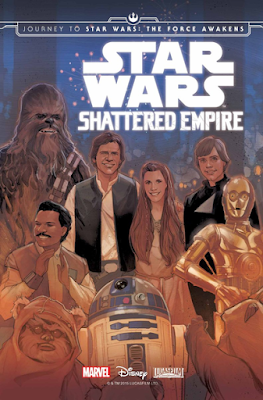 Star Wars: Shattered Empire by Greg Rucka with art by Marco Checchetto, Angel Unzueta and Emilio Laiso is the installment of "Journey to Star Wars: The Force Awakens" that I was anticipating the most.  But I was warned I needed to set my expectations lower.  And honestly some contributions to "Journey to Star Wars: The Force Awakens" disappointed me, so I started the read with concern that this Marvel comic would let me down.

As the Battle of Endor end we meet a young couple, pilot Lieutenant Shara Bey and Commando Sergeant Kes Dameron.  The married couple finds themselves assigned separate missions as the Rebels seek to communicate a simple message to the Imperials after the destruction of the second death star, you lost.  Yet, the Imperials fail to understand their fate.  While the couple's missions are generally different, the two have a habit of finding each other in the heat of conflict.  The two also support key Rebel leaders including Princess Leia, General Han Solo, General Lando Calrissian, and Commander Luke Skywalker.  Readers are left with a tension as the couple struggle to find time for their future while staring at a conflict that appears to have no end.  The volume also includes the first issues of the classic Marvel Star Wars series and the more recent Princess Leia mini-series.

I read Star Wars: Shattered Empire in a collection, so I got to enjoy the story in one read instead of having to wait for the four separate installments.  I think I benefited from this, as I did not have to reacquaint myself with Bey and Dameron when a new issue hit my hand.  I am inclned to like Greg Rucka writing, and the writing generally met my expectations.  Though it may not have exceeded.  Overall this has been one of my favorite installments in "The Journey to Star Wars: The Force Awakens."  While the story does share with Aftermath the use of original characters, Rucka and his art team make new to me heroes work by having them interact with original trilogy heroes.  And of course, visuals help.  Since I have the art to set the background, I find that my mind allows me to be in the Star Wars universe without feeling a need to force itself to imagine and without the frustration of wondering if I got the image wrong.  My mind really struggles when it worries that I am not properly framing Star Wars.

Star Wars: Shattered Empire was successful for me.  Rucka sets the tone that the war against the Empire was far from over after Return of the Jedi.  And I am pretty sure Han and Leia were leaning on each other in one scene.  While it was not the best Star Wars story I have ever read, it was very solid and helped prepare me for Star Wars: The Force Awakens.

Posted by Between Disney at 6:15 AM