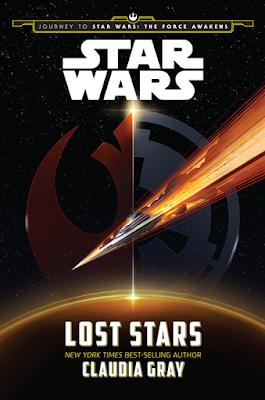 Thane Kyrell and Ciena Ree are two youngsters from the Outer Rim planet of Jelucan with nothing in common including culture, history and societal stature.  But they do share a love of flying and a desire to join the Empire as members of the Navy.  The two bond over their hope to abandon their world to explore the galaxy and make it a better place under the Imperial banner.  The two are selected to join an Imperial academy and begin their journey as Imperial citizens.  Though their friendship begins to fracture under the strain of Imperial service.  Eventually, Thane will turn his back on the Empire and eventually become a Rebel after witnessing the horrors the Empire can bring to a world.  Ciena however driven by her personal honor remains in Imperial service despite her strong and evolving feelings for Thane.  The drama of their relationship plays out in the background of the original Star Wars trilogy, including Hoth and Endor, and beyond the movies.  Can the two survive to discover what their relationship can truly be?

I loved Star Wars: Lost Stars.  Honestly I think it helped that the story starts with human characters in a simple to describe world.  This gives the reader time to get to know the new characters as developed by Claudia Gray before they take bigger steps into the galaxy.  Basically, I felt like I knew Thane and Ciena before more complex worlds and aliens were introduced.  And I came to like and worry about them.  By the time they arrived at the academy I was invested and after they left their friends were my friends.  I found myself tense over simple things like school assignments.  Events like watching their roles in the Battle of Hoth made me worry about the potential damage to their relationship.  Really this book is driven by their relationship, and I really enjoyed it.

Like all of the books in the "Journey to Star Wars: The Force Awakens" small glimpses to the new movie are mentioned.  I am pretty sure I know where the crashed Star Destroyer from the trailer came from and even who commanded it.  And through our characters eyes we get to witness how the Rebellion responds to their victories and the Empire to their defeats.  While this book does not tell me about The First Order, it is made clear the Empire still had life to it.

Star Wars: Lost Stars by Claudia Gray is a young adult book that adults will also enjoy.  For someone like me it shows events I know well from another lens.  Honestly, I now feel for some of those Imperials who died with the destruction of the Death Star since Gray shows us how many Imperials were simply people look those we know in our galaxy.  And my expectations of what I might see in Star Wars: The Force Awakens have been built with two powers struggling to command the galaxy on more equal footing.  But in the end, it is just a really good book.  It is the best of "Journey to Star Wars: The Force Awakens" and best of all it is something we really need more of, a really good Star Wars book!

Posted by Between Disney at 6:05 AM