Between Books - The Vault of Walt Volume 2 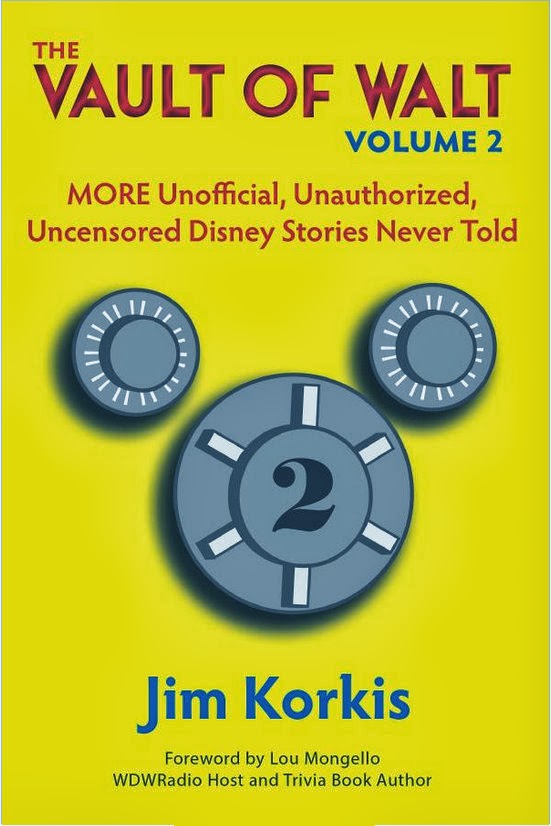 I honestly have not followed a lot of Jim Korkis' blog posts.  I am still a print guy, so for me The Vault of Walt was pretty much all new material.  And there were some essays that I still often reflect on when mulling Disney history.  But with the original printing now out of print and the cheapest copies at the time of this posting starting in the mid $50 range, I just cannot recommend that edition.  Now fortunately it does appear that the price has been dropping thanks to the printing of The Revised Vault of Walt.   But the revised edition did not collect all of the original material.  Could a second volume of this series make all of the original content available at an affordable price?

The Vault of Walt Volume 2: More Unofficial, Unauthorized, Uncensored Disney Stories Never Told by Jim Korkis continues in collecting his essays on Disney history.  Like the earlier versions this book is broken into four sections; Walt Disney Stories, Disney Film Stories, Disney Park Stories, and Other Disney Stories.  The essays are not connected and can be read out of order.  Essays printed before include: "Santa Walt", "Blackbeard's Ghost", "Captain Eo", and "Golden Oak Ranch".  New stories range from "Walt and NASA", "Secrets of the Santa Cartoons", "The Birth of the Disneyland Jungle Cruise", and "The Seven Snow Whites" which show the diversity of the included essays.

The Vault of Walt Volume 2 contains 15 new essays.  And honestly some of these essays caught my interest just with their titles matching some of my own personal interests.  I am a huge fan of Roy O. Disney so I enjoyed diving into "Roy O. Disney: The Forgotten Brother Who Built the Magic Kingdom" which does a great job of showing the elder brother's role in getting the Florida resort built.  And "Walt's Chicago" provides background to Walt Disney's relationship with his birthplace.  And of course in the wake of Saving Mr. Banks the essay "Mary Poppins: Walt Disney and P.L. Travers" delves into the story of Disney courting Travers and her opinion of the finished Mary Poppins.

The stories themselves are generally short and clear.  They are easy to read and in many cases discuss a piece of Disney history not normally touched on.  It would be an easy book to enjoy on a number of train rides where you stop and start the text over and over again (which may be the way I read this volume).  The majority do read like detailed blogs, and those who have read them before may want more new content.  But I am someone who has only read these tales in the print format.  Yes, in the electronic age I was first exposed to these in a physical form.

Let's look at the tale of the tape though.  There are two essays in the original volumes that I cannot find reprinted in The Revised Vault of Walt and The Vault of Walt Volume 2.  The  first essay, "Song of the South Premiere" has likely not been reproduced since Korkis now has in print Who's Afraid of the Song of the South which includes a chapter on the premiere.  The second essay, "Mickey Mouse Theater of the Air", is a highly interesting essay on Mickey Mouse in the era of old time radio.  So for half the price of the original volume, you can buy The Revised Vault of Walt and The Vault of Walt Volume 2 and lose one essay with the trade off of 20 new ones.  Or one can buy the two Kindle versions for a fifth of the original's current used price.  So I think it is obvious the Between Books recommendation is to buy the two books instead of tracking down a used copy of the original.

Fans of Jim Korkis will want The Vault of Walt Volume 2 in their collection.  Serious Disney fans will want this volume for the unique content found in its pages.  And those more casual Disney fans can find plenty of enjoyment within.  And best of all, nearly all of the originally printed essays can be purchased for a reasonable price!

Posted by Between Disney at 6:09 AM