Between Books - Life in the Mouse House: Memoir of a Disney Story Artist 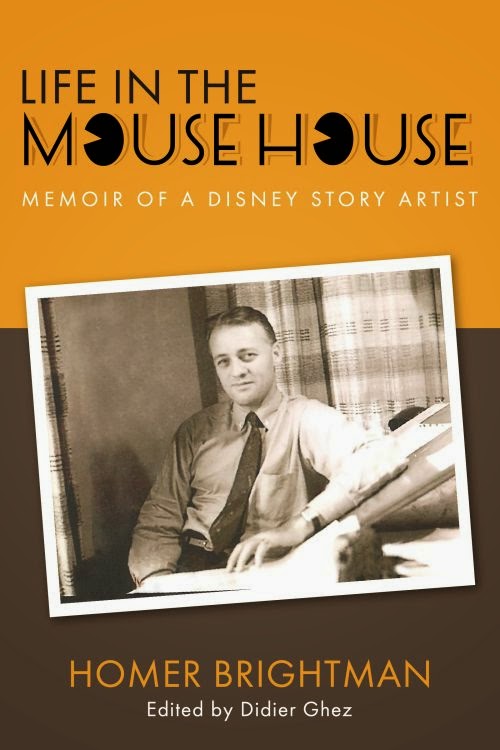 I think for most Disney fans, or at least for me, we often idealize working for Disney and Walt Disney himself.  However, as I have told colleagues in the past every work environment has problems and irritations.  Homer Brightman's memoir delves into the workplace at the Disney Studios during his 15 years of service and shows it was not all laughs producing animated shorts and features.

Homer Brightman's Life in the Mouse House details his 15 years of working at Disney as a storyboard artist developing gags and stories for Disney productions.  The book outlines how he came to get his position at Disney in 1935, his try out in animation and his eventual move into storyboarding.  He discusses the office politics of working at Disney, including the rivalries and poor corporate treatment.  Brightman includes his views of the 1941 strike and the outcomes of this labor dispute.  Walt Disney features heavily in Brightman's story as he includes his first story meeting with Disney and numerous interactions over his 15 years at the studio.  The story ends abruptly, with Disney breaking up Brightman's partnership with another story man working on Cinderella and Brightman's obvious frustration with the move.  Editor Dider Ghez then follows the memoir with a chapter on Brightman's post Disney years and a filmography and comicography both written by Alberto Becattini.

Life in the Mouse House is a short book, around 100 pages, that is a brisk and interesting to read.  The Brightman memoir was uncovered by Ghez and he was correct in thinking he had found an unpublished memoir of interest.  For the hardcore Disney fan, Brightman gives a different perspective than those who have penned books giving only praise to Disney, corporate and man.  The Disney Studios are a place that come off as a workplace filled with all the bumps that most of us many expect in our own workplaces.  One does not get the sense that Brightman hated working at Disney, he did stay for 15 years and wrote Disney comics and books as a freelance writer.  But the reader will feel that Brightman is being realistic with a tinge of cynicism.  It is a good reality check, Disney was just a workplace not an utopia during his 15 years.

I do think that the Walt Disney depicted in the book contains plenty of truth.  He is not the Uncle Walt from television.  Brightman does respect his story ability, and felt as if Disney respected him.  But Brightman does detail his failings as a manager who failed to credit staff, withheld praise, and instituted penny pinching policies, and could be both gracious and cruel depending on one's relationship.  I think other books have detailed this Walt, and nothing is a new revelation.  But it is interesting reading this depiction from a man who worked with Disney directly.  The depiction shows a man, not a legend, and it is reassuring to me that Uncle Walt with his warts was like me just a man.  It does need to be noted though that this is Brightman's perspective so he did not always have the full story.  So his resentment about a lack of a bonus for Snow White lacks the insight at the time that Disney was reinvesting into his studio instead of pocketing profits for himself.  So one does have to remember this contains the only story as Brightman saw it.

My one complaint is code words.  Brightman wrote this book with codes for real names, expect for Disney.  Brightman's family requested the memoir be published with the codes as he wrote them.  Ghez to assist readers has created a key based on context clues and external sources.  And during the first 20 pages I found myself constantly referencing the key and slowing my reading pace.  I can understand the family's desires, but I really wish the Ghez would have been able to publish the book with the real names so I would not feel the need to uncover who each individual was.

I had not planned to discuss price.  But then then got a shocker as I prepared this review.  The Kindle version is only $3.99.  I have paid attention to the prices of Kindle books trying to find discounted and free copies for Between Books.  So I can tell you that there are plenty of $3.99 Disney themed Kindle books that are not very good!  At $3.99 this is a steal.  This is especially true as the Disney history fan would find interest in this offering, but so would the general history reader who is interested in early animation or labor relations.  I did read this text as a physical book, which I enjoyed and expect will be dogeared after future projects.

Sometimes Disney is just a job.  Homer Brightman worked at Disney for 15 years and clearly enjoyed much of that time.  But he also saw much that upset and frustrated him.  Life in the House of Mouse collects these feelings and makes it clear that life for some is not always better on the other side.

Posted by Between Disney at 5:50 AM