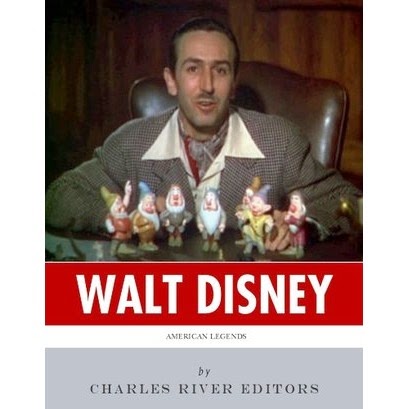 Charles River Editors is a group that specializes in creating Ebooks for various platforms.  In Walt Disney: American Legends they claim to provide readers an overview of Walt Disney's life in the time of a commute.  But I was left wondering was is this Between Book another rushed and short biography of Walt Disney that allows someone to make a quick buck while being light on content?

Walt Disney: American Legends by Charles River Editors is a brief biography of Walt Disney's life.  The book outlines the major chapters of his life from childhood to death in a book that could easily be read in less than an hour.  The book only covers the life of Walt Disney, and does not focus on more recent developments in the Walt Disney Company.  And being a brief book it typically does not go deep into any subject.

As someone with a history background I have two major problems.  The first is generalizations.  The authors make generalizations at times that have little evidence behind them or are factually incorrect.  For example, the book claims Disney never experienced a full school day in his childhood due to the Kansas City paper route his father owned.  However, this was only one period in Disney's childhood and does not take into account the Marceline or Chicago years.  At another point the book states that Roy O. Disney became Walt Disney's father figure.  I think this would be fine if they stated his male role model or mentor.  But I have never seen anything that showed that Walt Disney saw Roy O. Disney as a father.  I believe this statement misunderstands the Walt/Roy partnership dynamic.  At another point the book says that older bothers Herbert and Raymond were never part of Walt Disney's life after they moved off the Marceline farm, a statement that makes it appear they never had contact again and could be improved by replacing never with seldom.

The second issue is facts.  There are some "facts" that are simply not true.  For example the book states that during World War I Roy O. Disney joined the Army.  He in fact joined the Navy, which is a very different experience from the Army during this conflict.  Some of the missteps factually simply show that the book was likely written by someone who does not have experience with Disney history.  For example, the authors refer to the Walt Disney World Resort as Disneyworld.  And there is some familiarity that I am not comfortable with as the authors insist on referring to Lillian Disney as Lillie for example.

However with this said, this little volume is not afraid to pull punches and show the flaws in Disney's life.  The book discusses his managerial style and its negative impacts, the potential that he held to discriminatory practices and failings as a husband.  However, these topics in such as small book are really hitting the tip of the iceberg on deeper issues.  And I wish the authors had gone beyond the writings of Neal Gabler to support their views on Disney and race in order to provide themselves broad support for their viewpoint.

Would I have bought this volume for $2.99, I got my Kindle copy for free.  No, I would not.  I did find it to be decently formatted for an EBook and surprisingly readable.  I could see how someone writing a paper on Disney and needing information quick would find this useful with it being more detailed than one would expect from a Wikipedia page.  But in the end, Walt Disney: American Legends is just a taste of a much bigger story.
Posted by Between Disney at 5:44 AM