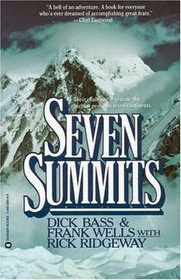 As I have read through books about the Eisner Era one impression that I felt solid about was that Frank Wells was a world class mountain climber.  The late Disney President had passion and skill in this high risk sport.  Well, this is wrong.  Because in Wells “own” words one can find an excellent account of his mountain climbing adventures that shows that Wells was an amateur and inept mountain climber.  But what he did have was determination.

Seven Summits by Dick Bass, Frank Wells, and Rick Ridgeway outlines the 1983 attempt by Bass and Wells to climb the highest peak on every continent within a year.  The logistical and physical feat is impressive itself, but would also set records like the oldest man to climb Mount Everest.  The book discusses how the two men both came to the idea to climb all seven peaks, how they met and the unlikely partnership that formed between Bass the commercial property developer and Wells the Hollywood executive.  The book follows the attempts they made on each mountain, including failed attempts on Everest.  In the end, only one of the two climbers would complete the challenge, but both men would be changed forever.

I do not typically read books about mountain climbing or even adventures set in nature.  But regardless, Seven Summits was highly entertaining and gripping to read.  The book itself was written by Ridgeway, who joined Bass and Wells on some of the climbs.  Ridgeway does an excellent job of putting together a detailed story about the efforts of these two men.  And with Ridgeway being a mountain climber who understands that pastime, the book is highly accurate and informative.  A comment I made to the Between Wife throughout the read was mountain climbing is not for me, it is too much work.  One thinks of climbs as being quick, not realizing the work needed to get to the peak.  In 1983, Wells and Bass spent most of their year in tents and huts, not comfy beds, as they moved their gear from camp to camp.  A climb on Everest or Mount Vinson in Antarctica takes weeks as one must establish bases before the assent to the peak can begin.

This story is an adventure.  Not everyone survives these climbs.  And some climbers come away with amputations.   It only makes it more remarkable that Wells survived 1983 when you realize his low skill level compared to the world class climbers he worked with.  Knowing that Wells had not yet taken his position at Disney did not lower my stress level as I worried his actions would cost the lives of other climbers.

It is because of Frank Wells that I wanted to read this book, in fact the only reason I picked it up.  And this is a very different version of Wells than I have read in Disney business histories.  This Wells is the main who gave up leadership of Warner Brothers to climb mountains.  And he is a climber who is highly inexperienced, not really in shape, cannot care for himself, and at times reckless.  He is also a man who proved to be relentless in completing a task he was not qualified for.  And a man who found satisfaction in the attempt alone.  He would not make it to the top of Everest, but one gets the feeling that the knowledge that he had his shot was satisfying in its own way.  You have to give respect to a man whose determination was what kept him pushing to the top if each mountain.  We also get to see the Wells who is between jobs.  He is a man who needs work, hopefully in 1984.  That job would be Disney.  And as we watch Wells work the phone to complete the impossible logistics of setting up climbs in places like Antarctica, well his operational skills rise to the top.

Seven Summits is a great adventure story.  The adventure will keep you glued to the pages, especially if like me you were riding the Matterhorn Bobsleds with its Wells’ tribute on the same days you read this text.  And for a fan of Disney history this is a very different take on Frank Wells than we expect of the man who excelled in the Board room.