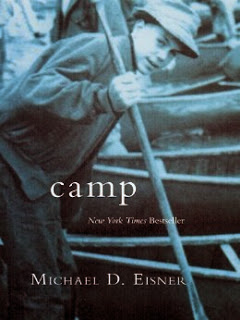 Former Disney Chief Executive Officer Michael Eisner recounts his nostalgia for a key portion of his childhood in Camp. Eisner’s family has a long standing relationship with Camp Keeywaydin in Vermont, a camp for boys that teaches canoeing, sports and other lifetime skills. Eisner tells the story of Camp Keeywaydin through the lens of several people. First, he tells his story with the camp from the first day his father introduced the camp to him and invited him to follow his footsteps as a camper. Second, he tells the story of two Orange County, California, youth who travel across country to leave their urban home for the wilds of Vermont. Third he tells the story of Alfred “Waboos” Hare, the late co-owner and camp director of Camp Keeywaydin who spent the majority of his life from childhood to his death at age 96 in 2011 investing in young people through his support of the camp. Eisner weaves between these stories in trying to provide a picture of the importance of camp experiences in the development of young people.

Camp is a love letter. Eisner was greatly impacted by his years at Camp Keeywaydin as both a camper and staff and believes that Waboos helped shape Eisner into the man that he became. Additionally, Camp was written as a distraction as it was composed during a time in which Eisner was under fire as the leader of the Walt Disney Company. So Eisner’s focus is firmly on Camp Keeywaydin with only a few glancing references to Disney properties. Eisner does succeed in sharing his love of the camp experience and his belief that it helped shape him and others into becoming men. For the Disney fan who is looking to understand Michael Eisner better, one will be satisfied. But for the Disney fan wanting more of the inside story of Disney leadership, one will be greatly disappointed.

The story itself is somewhat uneven. Eisner weaves between the story of several campers including himself. The chapters are not exactly in parallel throughout the book and each camper does not receive equal time in Eisner’s presentation. The writing however is very clear and easy to read. Eisner uses stories from camp to help demonstrate how adult values, such as honor, were taught through experiences at Camp Keeywaydin.

In the final analysis Camp helps readers to better understand the passions of author Michael Eisner. However, it does not provide great insight into the entertainment industry or Disney history. My most shocking revelation in the book was that Eisner’s son Breck directed the move Sahara, which I love! Those interested in the outdoors and the camp experience will likely enjoy this book. As a former camp counselor I honestly found it shocking that I never related any of my own experiences with Eisner’s. But those wanting to dig into the Disney experience will likely be disappointed.
Posted by Between Disney at 5:36 AM