Between Books - Prince of the Magic Kingdom 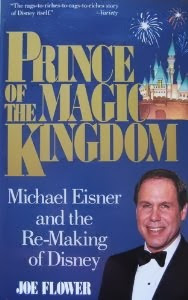 Joe Flower in Prince of the Magic Kingdom: Michael Eisner and the Re-Making of Disney provides a positive account of Eisner’s early Disney tenure. However, the book does not add much to the story of Michael Eisner at Disney. And as a text filled with factual errors and fallacies, this book is my least favorite account of the Eisner Era!

Prince of the Magic Kingdom is a pretty straightforward book. In 300 pages, Flower provides a background chapter on Walt Disney and his formation and expansion of his company. He provides a short biography of Eisner from childhood to Paramount. This is followed by the story of how Eisner and Frank Wells came into Disney leadership. The Flower discusses in several chapters Eisner’s first seven years at Disney. This is followed by a discussion of problems during the Eisner Era. He concludes with a prediction that the Eisner/Disney story will have a happy ending!

There are two things I find really difficult to deal with in this book. They are facts and assumptions. Erroneous facts include but are not limited to that there is no forced perspective in Walt Disney World, that the movie Howard the Duck was animated in the same way as Who Framed Roger Rabbit, and that the Hollywood focused theme park in Florida is the Disney-MGM Studio Tour (shortened in the index to Studio Tour). Flower is the only author that I have read who has shortened Stanley Gold’s name to Stan Gold. And on page 12 he states that Roy O. Disney was 13 years older than Walt, and 8 years on page 51 (the correct age gap). The second issue is assumptions. These include that Walt Disney was cryogenically frozen, that Roy O. Disney served as an obstacle to all of Walt Disney’s endeavors, that Michael Eisner revived Julia Roberts’ career in Pretty Woman (her 6th film released in her first 3 years of big screen stardom), and so many more that just put my teeth on edge.

Additionally troubling to me is that this book at times feels like a title about Imagineer Randy Bright and not Eisner. Flower uses numerous Bright quotes, who was likely one of the few insiders to speak to him. These quotes begin to make it feel like this book is not about Eisner but about edifying Bright. More sources could really have been helpful. There are enough factual errors and bad interpretation that some of his statements really require a source to back his facts that I have not seen elsewhere. He does cite Storming the Magic Kingdom as his source for chapter six, which is great because the chapter reads like a summary of that better researched and written book.

Flower’s biography is written seven years into the Eisner/Wells era. So none of the “bad” choices have happened yet and Eisner was still the hit of Hollywood. And Wells was still in the leadership partnership. With this being said, Flower’s writing comes off as the writing of a fan, not a journalist or impartial historian. I think the use of the word Prince in the title says it all. Flower writes as someone who is a fan and his attempt at the end of the book to be more critical of Eisner fails. This is especially true since some of the warts he provides were not directly related to Eisner. While other books written later in Eisner’s career are highly critical, following the wave of the day. Flower is on the other end of the criticism spectrum and at times it feels like Eisner could do no wrong. And as noted he does incorrectly predict that Eisner would have a happy ending at Disney!

Of all the Michael Eisner related books that I have read recently, Prince of the Magic Kingdom is honestly the one I would avoid. There are factual errors and author assumptions that one should simply steer clear of. When I think of those quickly written biographies of Disney stars of the moment, much like we saw with the Jonas Brothers, I see Prince of the Magic Kingdom as the Eisner equivalent!
Posted by Between Disney at 5:35 AM